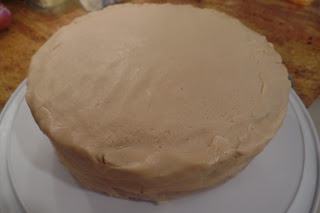 Raise your hand if you're a fan of carrots.

Okay, so those of you with your fingers pointing skyward--have you ever had a parsnip?

If you haven't had the pleasure, allow me to describe parsnips. They look like a carrot that is recently departed but still haunting your kitchen. You know, ghost carrots. Which makes them perfect for this month! The outsides look light tan, but if you peel off the part that grew in the ground, they're whitish. And the taste? Sweet with earthy notes. Some of them--especially the fat ones--can be kind of fibrous, and while you *can* eat them raw, it can be difficult to bite all the way through, especially at the thickest part. But they're absolutely delightful roasted.

Now that we've got that covered.

Raise your hand if you're a fan of carrot cake.
Good. Now keep it up there because whether you've had it or not, I know you're going like this parsnip cake. Well, I mean, you will if you also like ginger. Because the ginger flavor in this cake is pretty pronounced (which shouldn't be all that surprising as it's part of the name...) Still, if you don't prefer ginger, you can modify the recipe a bit and still have yourself a lovely, tasty parsnip cake. I'll indicate in the ingredients list what to cut.

The original recipe comes from a book called “The Vegetable Butcher,” by Cara Mangini, but I found it featured on a blog. In the interest of saving time, I'm not going to type out the directions for making it--I'll just link you to Shockingly Delicious, the blog where I found it, and you can follow along there. But since I have lots of photos of my process, I'll share a sort of photojournalism recipe situation. (That's a thing, right?)

I say it is, so it is. Here goes:
As you can see, this is a dense cake (like carrot cake) but it's packed full of flavor. And because of the melted butter, I found the icing to be thicker and greasier than a standard buttercream. Still, my favorite bites of this cake were the ones with the brown butter icing. Mangini noted that she likes to serve hers sort of "naked" on the sides but I say the more frosting the merrier. So of course I frosted the whole thing. That icing makes it!

Ingredients:
For the cake

2 cups (250g) all-purpose flour, plus extra for dusting the pans
1 cup canola oil (*per a note in the recipe, I replaced 1/2 cup of oil with 3/4 cup unsweetened applesauce)
3 cups peeled and shredded parsnips (*the recipe indicated that was about 1 1/4 pounds, but my market sells parsnips in a one pound bag and that was enough)
1 1/2-inch knob (1-1 1/4 ounces) fresh ginger, peeled and grated on a microplane (*if you aren't a fan of ginger, I'd suggest leaving this out. I used it and the flavor in the cake is pretty pronounced.)
1 tablespoon ground ginger (*again, if you dislike ginger, you could skip this; consider adding extra cinnamon or even pumpkin pie spice)
1 tablespoon ground cinnamon
1 teaspoon ground nutmeg (*I never use plain nutmeg. I always use pumpkin pie spice in place of nutmeg since there's nutmeg IN pumpkin pie spice, but also other things which tones back the nutmeg flavor)
1/2 teaspoon allspice
1 1/2 cups sugar
3 teaspoons baking powder
3/4 teaspoon fine sea salt
4 large eggs
3/4 cup low-fat or whole milk (*I used low fat)
1 tablespoon pure vanilla extract
1/2 cup toasted pecans or walnuts, chopped (*I used pecans)

Go here for those!

I think even Bugs would go for this one.