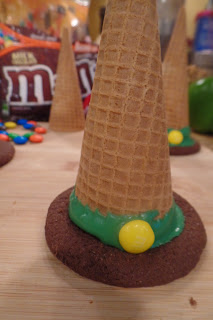 Remember these cute, simple-ish witch brooms? (I say "simple-ish" because sometimes those dumb thin pretzel sticks break when you're pressing them into the Reese's cup -- and sometimes the cups crack, too, which is annoying. But the end result is quite cute.) Well, those are always a hit. And why wouldn't they be? Pretzels and peanut butter cups are always a winner.

But today I'm sharing a different witch-inspired treat that is slightly more involved (in a number-of-steps regard) but simpler overall (in a nothing-breaks-while-you-assemble-it regard). But it's just as popular.

I only made four of these because, as you can imagine, we have a lot of dessert options around the house these days. One thing I like about this treat, though, is that you can make as many or as few as you need. Another thing I like is how it's so easy to customize based on your preferred candies. The only limit is your imagination (and, you know, the size of the cone).

I didn't follow a specific recipe, per se, but I did find my inspiration from a photo I saw on Pinterest. It links to the It's Always Autumn blog. I made a couple swaps for ingredients the inspiration recipe used, because of either cost, availability, or my convenience.

For instance, the blogger used Oreo cones, which I also wanted to use because, hello, chocolate cones! Sadly, I couldn't find them at two different markets, so I settled on the plain ones. I think the end product would look and taste even better with the Oreo kind, though, so if you can find them, by all means, give those a whirlio.

For the cookies, the blogger used those delicious crispy Famous Chocolate Wafers. My market had them but they were almost $5 for a small box. I was like, "Yeah, no." Then I saw some soft-baked chocolate cookies for $1. I was like, "Sold." That particular substitution was successful as far as flavor, size, and appearance. (In fact, I actually think the size was better than the inspiration recipe because the other cookie was smaller and only just covered the cone opening.) However, from a texture perspective, I do think a crunchier cookie would have been a safer bet. The soft ones were crumbly at the edges, so if you moved them by holding the cookie itself before they were fully set (which made it possible to lift them from the cone), they started cracking. (Forewarned is forearmed.) Basically, your best bet is to use any semi-crunchy cookie whose diameter is greater than the diameter of the open part of your cone.

Finally, rather than using icing and melted chocolate chips, I used my handy green candy melts because those served a dual purpose ("glue" and decoration), and used an M&M for the buckle.

Here's what I did: 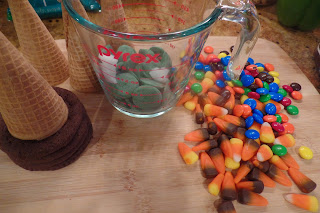 1. Melt the candy melts with coconut oil according to package directions. It should be smooth but reasonably thick in texture. 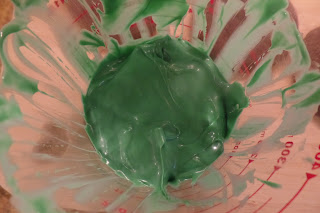 2. Dip the opening of the sugar cone 1/4"-1/2" into the green candy melt. Give the cone a little twist so that it gets a good coating. (For the cone pictured below, I didn't dip deep enough and so I had to perform Step 5 below.) 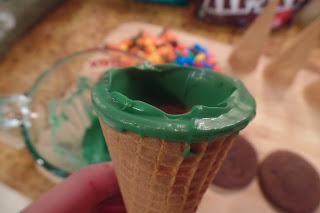 3. Flip the cone so that the opening is face up. Fill with candy. 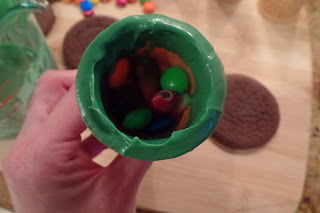 4. Center the cookie on top like a lid. Then gently flip it over and place the cookie-side on a plate. 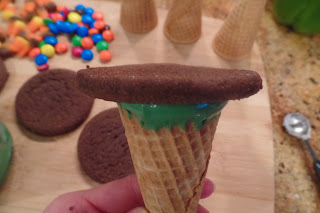 5. (If necessary, use the back of a spoon or spatula to add additional green melt if you need to form a better seal between the cookie and cone, or if the green doesn't come up high enough. I needed to do that on one of mine--which I hadn't dunked deep enough-- but not the other three.)

6. Place a yellow M&M somewhere along the seem as a "buckle."

7. Allow the candy melt to fully harden before serving. Store extras in an airtight container. 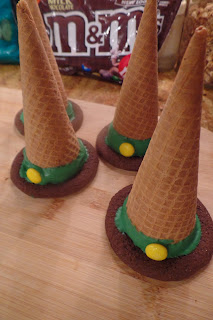 I happened to have extra candy melt (I originally melted 4 ounces but only needed half that amount for the cones) as well as 3 extra cookies, so I decided to spread the leftover green melt on top of the cookies and decorate them with festive sprinkles. 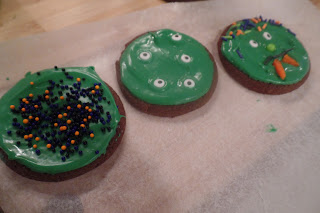 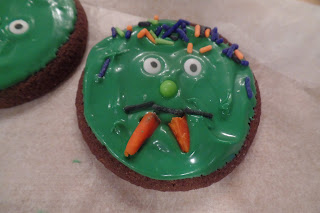 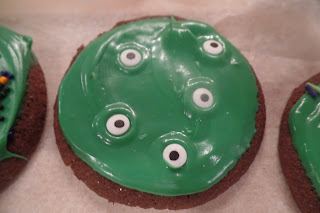 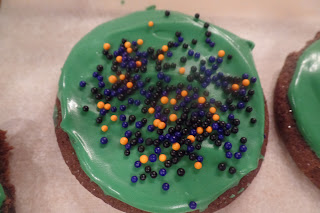