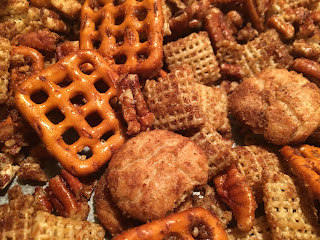 Picture it: mid-afternoon, you're working at your desk, the munchies strike.
What do you do?

A pumpkin spice-flavored Chex mix that is. soooooooo. good.

(Seriously. As I outlined just yesterday, I'm not that much of a pumpkin spice person. But this stuff? It wowed me. It hits some salty notes because of the pretzels, and also some sweet notes--okay, a lot--from the honey graham cookies and added brown sugar. Plus, there's a warmth from the cinnamon and pumpkin pie spice. It's just kind of delightful and I'm sort of concerned if I made the mistake of sitting next to the bowl rather than portioning out a smaller serving, I might accidentally devour the lot of it.)

Plus, you don't even need the oven. This is a microwave dealio. (I was hella dubious about using the microwave, but it worked, I tell you! IT. WORKED.)

I found the idea through Pinterest--in fact, it was one of the first pins I saved to my October Festive Daily Pins board (where I stash ideas for things to try during the October countdown)--but it took me almost three years to get around to trying it. Which, now that I've had some, is a travesty, I tell you! The missed snacking opportunities make me weep.

Anyway, it comes from the Fresh April Flours blog, and, like I said, it's a solid recipe as written.

I did make a couple minor changes because of personal preferences and/or supplies I already had in my kitchen, but it wasn't anything significant. Still, when I share the recipe below, I'll indicate what I used/did. If you want to see the original, visit the link above.

2 1/2 cups Rice Chex (totally went generic this time; #sorrynotsorry)
2 cups mini pretzels (I used the square checkerboard kind because I had them on hand)
1 1/2 cups honey graham cookies (the original recipe called for Cinnamon Teddy Grahams but I used Horizon Honey Grahams because A. They're delicious, and B. I already had a box here)
6 oz (about 1 1/2 cups) pecan halves (the original recipe said to roughly chop them, but I crunched them up with my hands as I added them to the bowl, so a lot of them stayed in large pieces or even as the halves, which is what I wanted)
1/4 cup (half stick) unsalted butter, melted
2 teaspoons vanilla
1/4 cup plus 1 Tablespoon brown sugar (I used dark brown for the added molasses flavor)
1 1/4 Tablespoon pumpkin pie spice *
1/4 Tablespoon ground cinnamon (*the original recipe called for 1 1/2 T of pumpkin pie spice. I made the modification to account for the fact that I didn't use cinnamon grahams as per the original recipe, so I was trying to bump up the cinnamon flavor accordingly. You can do either.)

1. In large microwave safe bowl, add your cereal, pretzels, cookies, and nuts, then set aside. 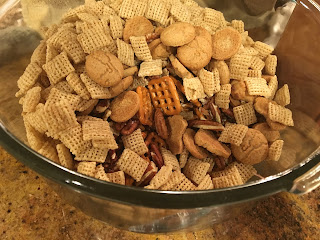 2. In medium microwave safe bowl, melt your butter. Then add in vanilla, sugar, and spices, stirring until smooth. 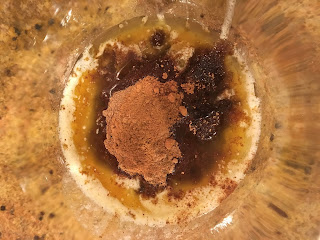 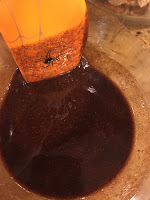 3. Drizzle the liquid over the snack mix from step 1. 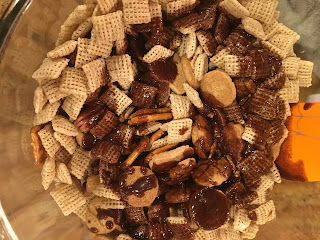 4. Use a spatula and lightly toss until the seasoned butter is coating your snack mix. 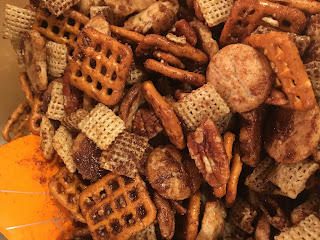 5. Microwave for 1 minute (on full power). Stir gently. Then microwave for 3-4 additional minutes, stirring gently after each minute, until the snack mix looks slightly browned.
* NOTE: The original recipe pointed out that your cookies will start to get soft while they're heating up. But she said not to be alarmed because they'll get crunchy again once they cool down. SHE IS RIGHT! They definitely got soft, so it's important to be gentle as you stir after each minute. But they also crisped right back up when the mixture cooled down. Like magic! 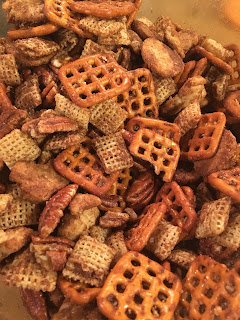 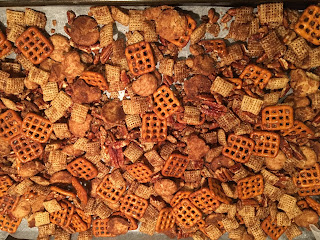 Or on a bowl next to your computer where you can grab just one more bite after that other one last bite you had a second earlier or the one before that. It's okay. It's snack time, after all. 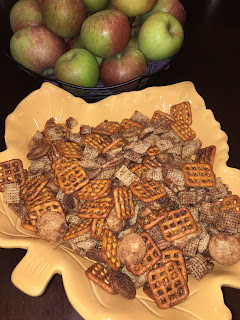 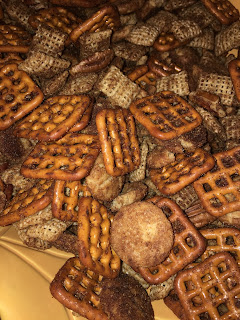