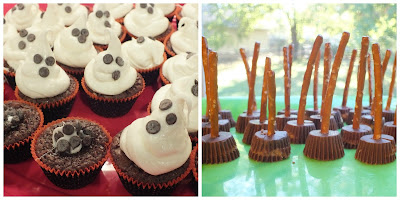 This morning when I woke up I heard my husband listening to Halloween music downstairs with my daughters. The first song he played was this H-A-double L-O-W- double E- N spells Halloween song I sang in elementary school and still, to this day, sing to myself every time I write the word Halloween. After that gem, he put on Double Trouble from Harry Potter. I love that one, especially because of its Macbeth connections. He rounded things out with Monster Mash. I don't care for that song since it conjures awkward memories of middle school Halloween dances... yikes.

I take great pleasure in exposing my kids to the things I enjoyed when I was a kid. We watch Michael Jackson's Thriller all year round, but especially enjoy it this time of year. And I've got several Disney shorts in my youtube playlist, among them,  Mickey's Haunted House  and Silly Symphony The Skeleton Dance. In fact, two years ago all four of us dressed up as skeletons because of the Skeleton Dance video. Before they went out trick-or-treating, the girls and I performed our own version of the dance in our kitchen!

All of this has nothing whatsoever to do with my treats for today, but still, I wanted to share some of those songs for your own Halloween enjoyment, especially as we're down to the final week here. It's now an official countdown to Halloween!

For today, I've got a couple bite sized Halloween desserts. I sent both these treats with my husband and daughters to a party. Easy to grab, easy to share. Perfect.

I made the simple witch brooms in the past and I came up with these ghostly brownie bites out of my own noodle.

Let's start with the brooms which, I just realized, I can tie in to this adorable Halloween story my younger daughter loves called Room on the Broom. You can make these and eat them whilst enjoying that story. Yes, that's a fine idea. Do that. 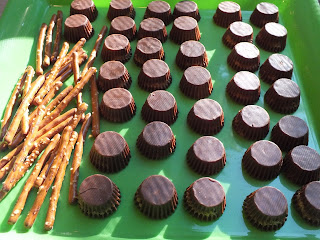 The two ingredients for your brooms

Now... put the pretzel stick into the bottom of the peanut butter cup. 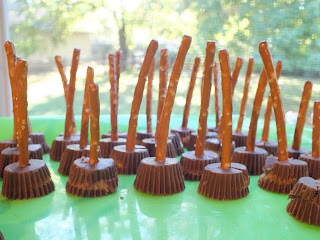 Insert pretzel & presto: it's a broom!

Ta Da! You're done! It's now a broom and you're a dessert hero.

I should warn you, though, that easy as that process is in theory, there are some annoying things that can happen which make the process more challenging than it seems.

1. The peanut butter cups, when unwrapped, are not always completely enrobed in the chocolate and have peanut butter showing through. (You can see what I mean in several of the cups in the zoomed in version of the above photo. In particular, look at the one that's second from left in the front row.)

2. The insertion of the stick very often cracks the chocolate. (See the first three front right samples in the photo above.) That happened to me A LOT this year, and less last year.

3. Occasionally the pretzel sticks break if they're handled too roughly while inserting them into the cup. That happens less often, but it's worth noting.

This year I tried avoiding some of these pitfalls by pre-drilling, if you will, a hole into the spot I'd be inserting the pretzel stick. I used a wooden kabob stick. It had a point on the end (like a toothpick) so it pierced through the chocolate easier than the blunt edge of the pretzel stick could, but it still wasn't as wide as the pretzel so there was still some chocolate cracking.

When they cracked, I just smooshed them back together as best I could. The others, I ate right then. :-)

Anyway, forewarned is forearmed, I always say. So now you know.

Next, the brownie bites. 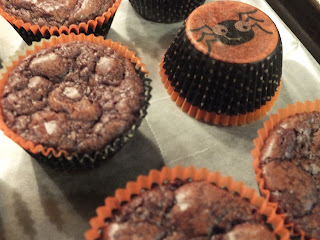 I used a boxed brownie mix and followed the package instructions for making the batter. Then I lined my mini-cupcake pan with these cute spider liners. (I think they're Wilton brand from last year, but I'm not positive.) I scooped 1 medium OXO scoop of batter into each liner and baked according to package directions. Mine took about 18 minutes. Just keep your eye on them so they don't overbake. 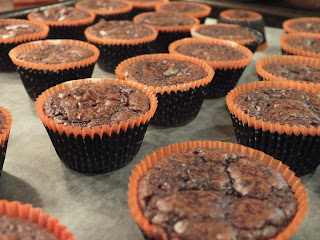 After they cooled, I decorated them using my trusty "put store-bought frosting in a freezer bag and snip the tip for easy piping" method.

I used a new Pillsbury Fluffy Vanilla Marshmallow frosting I saw at the market. It just sounded good because chocolate and marshmallow? Yeah, they go together.

I piped little ghost mounds on top and used chocolate chips as eyes and mouth. 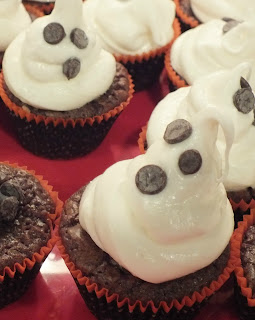 These were scrumptious. The brownies were chewy and chocolatey and that mound of fluffy marshmallowy goodness on top added the perfect sugary topping. So good. (This could so easily be turned into a s'mores treat, it's not even funny!)

So there you have it. Not one but two easy treats--perfect for classroom or office parties-- to kick off our countdown to H-A-double L-O-W-double E-N!
Posted by Natalie M at 9:45 PM