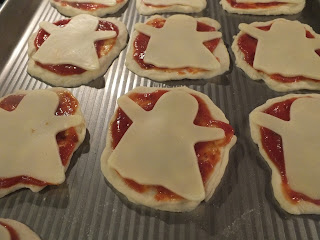 Here they are in their uncooked state, when they're still just Boo-Ya pizzas...

So what did you do today? I went to two Halloween parades and one Halloween class party. Then I came home, changed out of my pirate costume, made a batch of Oreo fudge for a fundraising bake sale happening tomorrow, and then made mini pizzas for dinner tonight.

I've seen recipes for these mini pizzas before (in fact, I've made these) but the recipe calls for using biscuit dough. My kids hate biscuits. But they do like regular pizza dough. So I decided to be all clever and buy a ball of dough from my supermarket to cut out my own biscuit shapes to make the base something they'd eat. Sometimes I'm so clever.

Here's the (easy) process, with photos, so you can also feel clever.

Use sliced mozzarella cheese and a ghost-shaped cookie cutter to cut out cheesy ghosts. 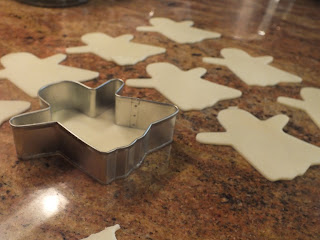 There will be a scrap heap. 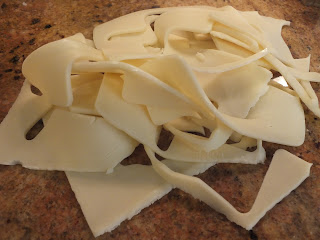 Run a knife through over the scraps so they're more like shreds. 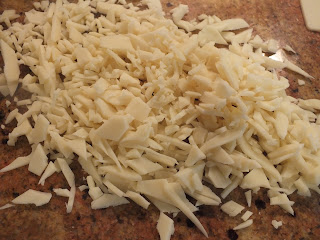 Set all the cheese to the side.
Take the refrigerated dough out of its bag and put it on a lightly floured surface. Open the sauce. 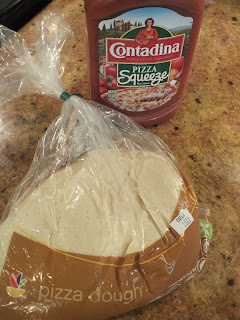 Roll out the dough until it is about 1/4-1/2 inch thick, then use a 3-inch round biscuit cutter to cut circles from the dough. (These are likely smaller in diameter than the cheese that gets placed on it, but the dough is about to get worked into larger rounds.) 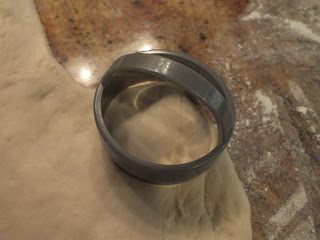 Stretch the cut circles so they're slightly larger than the cheese ghosts. This isn't as easy as it sounds. Don't be surprised (or upset) when shapes other than circles are produced, and when they are in no way uniform. Lay the amorphous blobs on a cookie sheet. 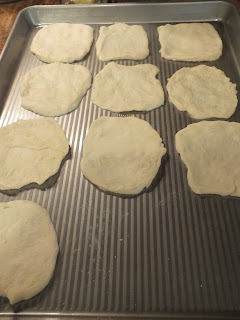 (Note: Because I only used 10 slices of cheese, I only made 10 mini pizzas. I used the remaining dough to form a larger semi-circle and used some of the "shredded" cheese as topping.)
This is the point in my process where I made a boo-boo, hence the name of my pizzas today.

I topped each pizza with our favorite pizza sauce, then with a cheese ghost, and some mini pepperonis in the vague formation of faces. 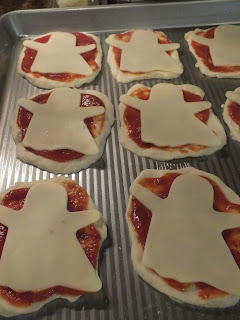 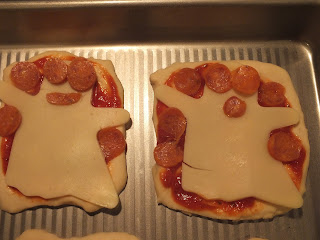 Then I baked them in a 450 degree oven for 14 minutes (the dough package said 20 minutes, but because everything was kinda thin and rather smaller, they were done at 14.)

When I took them out, they looked bubbly, cheesy, perfectly delicious...but the ghosts--as is the way with ghosts--had disappeared. 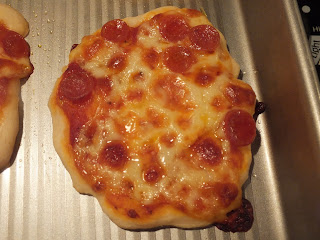 ...and here they are in their cooked state, when they have become Boo-Boo Boo-Ya mini pizzas.

Suddenly, not feeling so clever anymore. Alas, this has happened to me before. Last Halloween. But I forgot. Until I opened the oven and saw these. (Thankfully, I showed the girls the pre-baked version so the aesthetic value wasn't totally wasted.)

It's not too late for you, though. You can still feel clever because when you make these, you can avoid my boo boo. What I SHOULD have done (and what you should do) is bake the dough and sauce, then add the cheese slices when the dough was done. Then the ghost shape would have held up.

Or live and learn, forget, live and learn again, have to share that learning on the blog, feel dumb, talk self out of feeling dumb, know it doesn't actually matter, eat delicious pizza that only looks like mini pizza instead of mini ghost pizza, rename blog post accordingly.

You know. Whatever it ends up being for you.