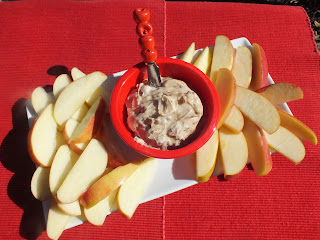 You know what's totes annoying? (No, not the word "totes." How dare you? That's a fun word and I like it a lot. Especially when followed by the word "magotes." (I refuse to spell it like the animal, btw.) However, according to this list, I need to stop using this phrase. Like, last year.)

I disagree. Thus, I repeat:  You know what's totes annoying?

When you start making a simple--and I mean simple--recipe (found in my Taste of Home magazine) and encounter difficulty. Also, when you open brand new packages of ingredients to find them spoiled. Also, waste.

That's what happened to me whilst making today's tasty after-school TGIF snack. (Omigosh. Remember TGIF on ABC circa 1988-1991 when I still watched it? Ah...memories.)

I digress. I was talking about my treat.

So there I was, making my half-batch of apple brickle. (Because, really, for an after-school snack for my kids, do I really need more than a cup yield? No, ma'am.)

I'd softened my 4 oz of cream cheese. I'd added 1/4 cup of brown sugar, 1/8 cup (aka 2 Tablespoons) of white sugar, and 1/2 teaspoon vanilla extract. I'd beaten it with my hand mixer so it was blended and fluffy. 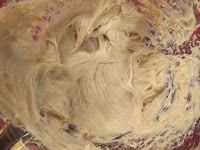 All I had to do was add my 1/2 cup of brickle. (If you're sitting there thinking, "What the hell is brickle?" the answer is little toffee bits. Basically, the inside of a Heath bar, crunched up.) 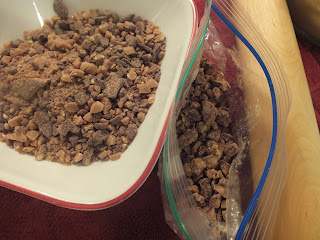 Bits o brickle looks like this, though it doesn't contain the chocolate pieces in it.
This photo shows the milk chocolate toffee bits.

I had my Hershey's bits o' brickle right there. A whole bag of them. I cut open the bag and...phew! I was met with an odor of rancid brickle. I don't know if you've ever smelled the sour stench of oil that has gone rancid, but that's exactly what it smelled like. (A quick check of the ingredient list shows two different types of oil in there--gross, by the way--thus, I'm assuming that was the issue there.) I checked the Best By date...ok, in fairness, that was an old bag (like, BB Oct 2012 old). So, okay, use stockpile in more timely fashion; lesson learned.

A minor setback to be sure, but not a catastrophe as my cupboard housed a bag of Hershey's milk chocolate toffee bits. (Basically, a crushed up Heath bar.) It housed two bags, in point of fact. I opened one, and...also rancid. So I opened the third WHICH WAS ALSO RANCID despite being dated this month.

I had to throw them all out! How disgusting. And what a waste.

I happened to have a bag of snack sized Heath bars leftover from a recipe I made quite a while back  (their BB date was 06/2015). Strangely (and thankfully as I was out of options otherwise), they were still fresh. I don't know if it's because they're individually wrapped, or because they're somehow protected by the chocolatey exterior, or even just because they're whole as opposed to bits and so maybe easier to stay fresh. Who can say? But whatever it was, I opened several of those, stuck them in a baggie, and crushed them with my rolling pin. You can see in the previous photo the side by side comparison. The bowl on the left shows the bag of pre-crushed (rancid) milk chocolate and toffee bits; the right shows the baggie of mini Heath bars I crushed myself using the rolling pin next to the bag.

Then I stirred them into my cream cheese mixture. 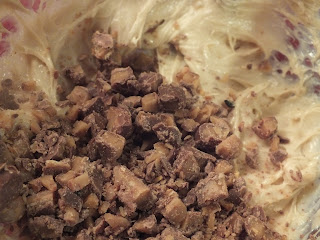 I popped that in the refrigerator until just before I was ready to serve it. (It's cheese, after all.)

I sliced apples into wedges to serve alongside the brickle as a dipper.

For the apples, I wanted to try something new. I bought two new (to me) varieties of apples when last I shopped: Sonya and Ambrosia.

In an effort to keep them from browning after I sliced them into wedges, I soaked them for five minutes in a bath of salt water (4 cups of water and 1 teaspoon of salt), rinsed them off (to remove any residual salt), and patted them dry. Boomski. No browning. 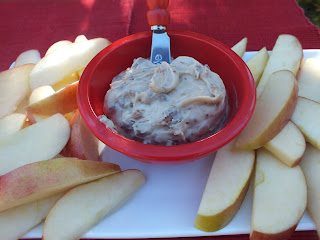 On the right, Ambrosia apples. My family found them sweet with a flesh texture reminiscent of a Red Delicious apple (which, I'm not gonna lie, I dislike as I find it mealy). On the left, Sonya apples. 3 out of 4 of us preferred the firmer, crisper, slightly less sweet (than the Ambrosia anyway) taste and mouth-feel of this type. 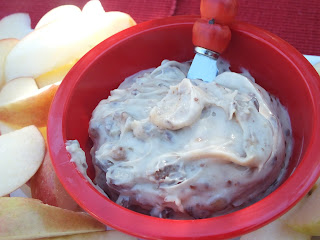 Despite a somewhat rocky start, this snack ended up being a winner. The dip (which we used like a spread instead) was tasty with its perfect blend of sweetness from the sugar, crunch from the candies, and creaminess from the cream cheese and vanilla; plus, we discovered two new apple varieties which were fun to taste-test.

In my book, that's totes a good thing.