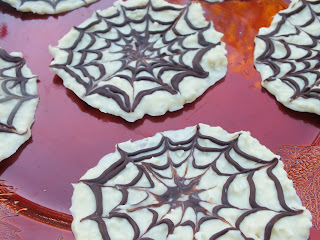 I don't prefer a real spider's web. It's too sticky and stringy and, I don't know, usually attached to a spider for my comfort. Ever had a spider ON you? I have. In the car. Not good. Nooooo, not good at all. <shudder>

Nevertheless, candy made in the shape of a spider's web? That I can support. It's not sticky or stringy, nor is an arachnid anywhere near it. Plus, it's made of white- and semi-sweet- chocolate and there's coconut. Hello! Bring on the candy webbage!

I saw this recipe in the 2010 Taste of Home Halloween mag. (Big surprise, right?) I selected it as today's treat because it's another low-yield recipe and because it sounded like something I want to eat for dessert tonight. What? Those are solid reasons.

Bonus: It's another easy one consisting mostly of melting.

Let's get down and go for it, shall we? (Oh, and do yourself a favor and skip past the first 29 seconds of that video as it's a needlessly long intro. But don't skip the video. SBTB forever!)

Assemble ingredients. Here's what you need: 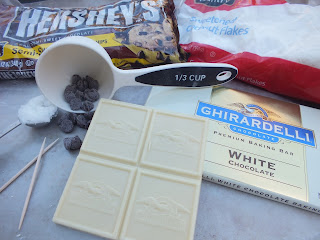 Start by melting chocolate chips in a microwaveable bowl. Mine took 40 seconds. Be sure to stir them when you remove them from the microwave because, in a lot of cases, the heat from the melted chocolate will help melt the rest. Do not over-heat the chocolate or it'll burn. If it burns, don't try to save it. Start again. Burnt chocolate is nasty.

Remove from microwave and allow to cool slightly while you work with the white chocolate.

Add the white chocolate and shortening to a separate microwaveable bowl. Microwave on 50% power for 90 seconds. Stir. If the chocolate isn't melted, put it in for another 30 seconds at 50% power. Be sure to keep stirring and be extra careful not to burn. White chocolate burns easily. Mine took about 2 minutes and 15 seconds. Just check it. This is the nice, creamy texture it should have when it's ready. 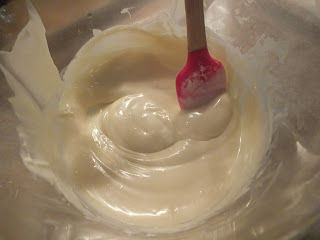 Now add in that coconut you chopped up. 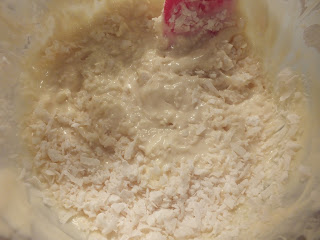 Stir to combine. Obviously, now the mixture has some texture. 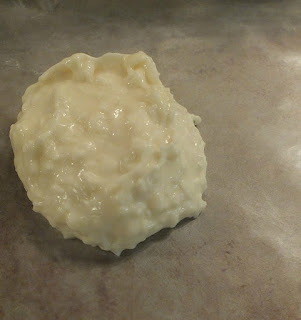 Use the back of a spoon to spread the dollop so it's about 4 inches around. 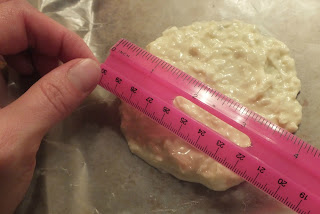 This actually was only just shy of the full 4" but no photo angle would show it. Weird!

Now let's deal with that chocolate that's had a little time to cool down. Gently scoop it into one corner of a freezer baggie (remember: I always suggest freezer baggies instead of regular baggies because the plastic is thicker. I've used the regular baggies and the seam has burst open because of the wimpy plastic.) Note the pointy tip at the end in the photo below. That gets snipped off in a minute. 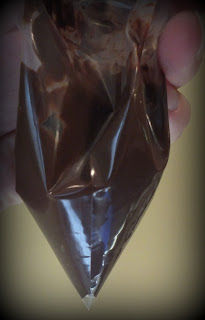 Back to the circles. (I got 6 on my pan, by the way. The original recipe said it had a yield of only 5.) 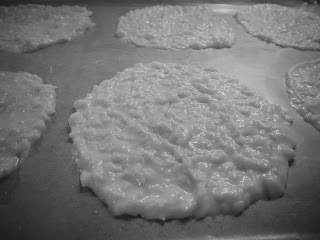 Look at the texture of that coconut! Yum-a-lum-a-ding-dong!

Snip the tip--a tiny snip because you do not want globs or too-thick lines--of the baggie holding the semi-sweet chocolate. Starting in the center of the white chocolate circles, pipe a swirl shape as in the photo below. Repeat for each candy round. 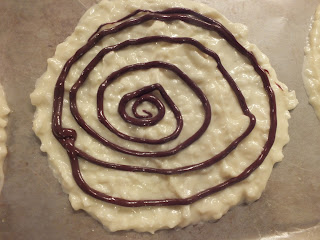 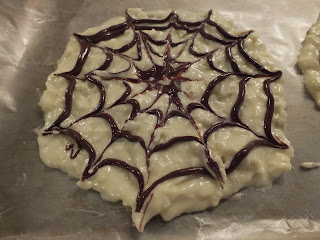 Try to work quickly to avoid the chocolate setting before you're done.

Pop the tray into the fridge for about 30 minutes so the chocolate sets. 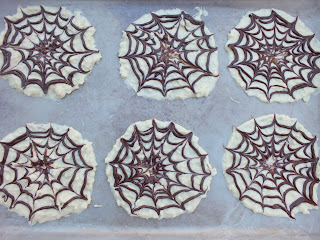 That's it! Easy peasy. (PS- That's an easy Halloween costume idea for you, also. You're welcome!) 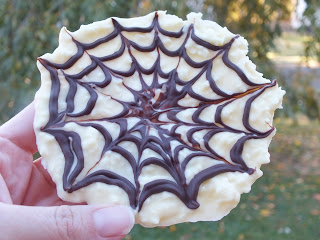