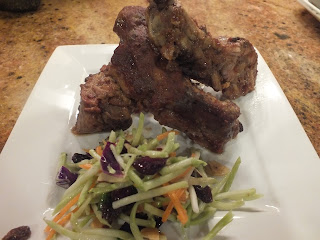 Who is hungry for a stack of bones and a side of witches' whiskers?

I don't know about you, but all I can think right now is this Dr. Seuss rhyme "Never Give Your Daddy a Walrus" from Oh Say Can You Say:

A walrus with whiskers
is not a good pet.
And a walrus which whispers
is worse even yet.
When a walrus lisps whispers
through tough rough wet whiskers,
your poor daddy's ear
will get blispers and bliskers.

What? Just me? Okay then.

Anyway, where was I? Oh yeah--dinner.

So I busted out the slow cooker today. I love when my dinner bubbles away without my constant participation. It was a good day for it, too, since I spent the 3:30-5:30 hours running hither and thither, picking up my daughter at school, going to the doctor (sinus infection, anyone? Oh yeah, me. Boooooo!), trying to pick up my medicine but being told it wasn't ready for 30 minutes, killing time at Target, returning for the medicine, picking up my other daughter at school. But all the while, I knew dinner was a-makin' so I didn't stress.

The "bones" are baby back ribs (I know this is what you're thinking. If not that, than this.) and I used a recipe I found in the 2013 Taste of Home Special Edition Ultimate Halloween magazine. Apparently it, like so many others I've paid $9.99 per magazine to have, is available online. The witches' whiskers is a broccoli slaw, the recipe for which I honed over the past two years. It's refreshing and tasty and easy to pull together just before serving.

For the "bones," combine the following ingredients in a large bowl and set aside. 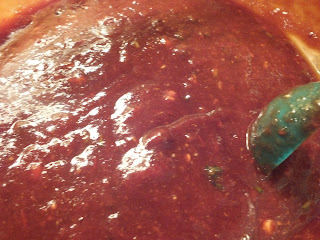 Have some sauce. I made it extra sloppy for ya's!

Cut 4 pounds of pork baby back ribs (I used a little less-- my package had just under 3.5 pounds worth) into individual ribs.

I'm not gonna lie: this part of this recipe grossed me out. First of all, when I went to the market to buy the ribs, I found them vacuum sealed (a good thing) but there was still some degree of air in the package because there's blood in there. The thought of having to cut open the package to expose the blood was bad enough. But then actually doing it, and having to handle raw, cold, slippery ribs afterward so I could saw through them? Ugh. Handling raw meat-- especially poultry--grosses me out so much. I do as much with a fork as humanly possible. I don't care that these ribs aren't poultry and are, in fact, "the other white meat" -- I still don't like it.

While I was standing there alternately whimpering at the grossness of the meat slipping through my fingers and grunting at the knife not slicing through as easily as I'd hoped (no doubt it wasn't sharp enough), I couldn't help but think negative thoughts about how my girls probably wouldn't even end up eating this. (My husband is the true rib-lover in our house.) Sigh. I know--everyone is super enthused to try making these at home now after my descriptions. haha. The thing is, I tell it like it is. That's how I roll. 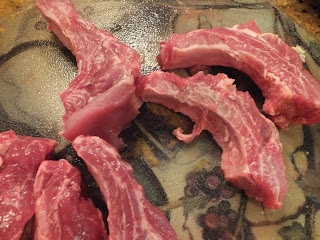 Ribs in their raw state that I painstakingly cut apart. Mmm...raw-ribby.
(Don't skip that clip. It's the funniest section of the movie Big Top Pee Wee.
The egg salad scene is hysterical and then Pee Wee wanting his cheese sandwich... Hahahaha.)

Moving on. Once you get through that unpleasantness, dip each individual rib into the sauce you made, then transfer the dipped ribs into a 5-quart cauldron. Er, slow cooker. Pour the remaining sauce over the ribs in the slow cooker. 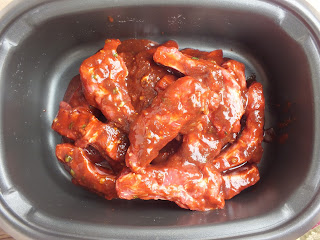 They look kinda like saucy buffalo wings, don't they? 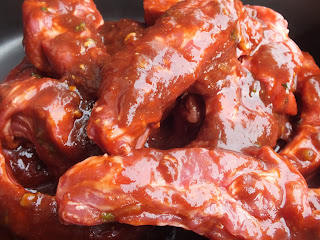 Meanwhile, I'm the only person I know who takes a crock pot filled with raw ribs outside for a photo shoot...

Cover and cook on low for 4-5 hours or until meat is tender. 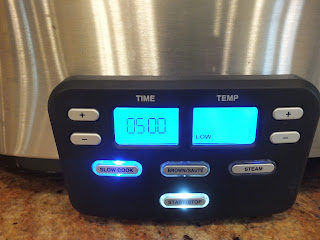 The snazzy Cuisinart crock pot my mother-in-law bought us for Christmas a couple years ago!

About 20 minutes before you're ready to serve the "bones," assemble the slaw. It allows the flavors to marry and the slaw to soften just a touch.

For the slaw, you need:

juice of 1 lime
2 tablespoons extra virgin olive oil
1/4 teaspoon salt
1 green onion, sliced (for zing)
1 handful of sliced or slivered almonds (for crunch)
1 handful of craisins, raisins, or even dried cherries (for sweetness & chew)
10oz bag broccoli slaw (NOT regular cole slaw mix which is cabbage-heavy, and NOT rainbow slaw which is cauliflower heavy &, in my opinion, gross) 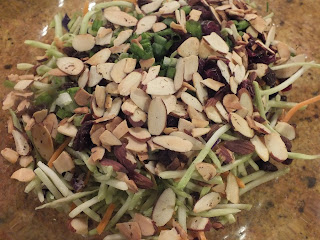 Toss to coat. Set aside until ready to serve.

I usually half my own recipe because my family doesn't ever seem to consume the full 10 oz in one sitting.

When it's time to serve, stack those bones on the plate so you can justifiably call them Stack of Bones. Feel free to either serve with the juices from the crock pot or with your fave BBQ sauce (which is what I did because SWEET BABY RAY'S). I liked mine, but felt like some of the rib meat was more tender than other meat. In addition, I need a little more heat and tang on my ribs, which is why I added BBQ. My husband agreed. As for my worries that all my toiling was in vain, I ended up pleasantly surprised. My older daughter devoured two (granted, I had to rinse the rib, remove the meat from the bone for her, and serve it with Caesar dipping sauce. Still, whatever works...) and my younger daughter liked them straight from the slow cooker.

What a relief. Now I can put the cauldron away for another day and think about dessert...
Posted by Natalie M at 10:00 PM