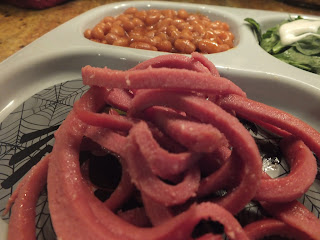 Thursdays are busy around here as we have swimming lessons in the evenings. (And by "we" I mean my kids. I'm proud to say I've been swimming since I was a lass. Yeah, I just said "lass"-- what of it?) Lessons used to be right after school which was challenging in its own right because it meant a school pick up with barely even enough time for changing. But now they are in the evening. In a way, it's better. It gives the girls time to get home, do homework, and eat dinner before lessons. But it's a small window of time and, for some reason, always seems to get away from me.

Ergo, quick dinners. Most of the time Thursdays end up as "leftovers night" but some weeks (like this one) there are no leftovers to speak of. So today, I had to go another way. 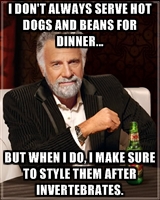 I made this through memegenerator.net
I. Am. Hilarious. (Or a nerd. It's a tossup.)

But seriously, I very rarely serve hot dogs. They taste good on occasion, yes, but after I eat them, I feel guilty since they aren't exactly healthy. Plus, sometimes they give me a headache. Probably due in part to the nitrites in them. (What's a nitrite, you ask? See here. Once, when I was pregnant, I forgot about nitrites and ate a hot dog for lunch. Nitrites aren't good for anyone, but pregnant ladies, especially, are supposed to avoid that junk. Typically, I was meticulous about following the safe-eating guide of pregnancy, but that time, it slipped my mind. That is, until I was just about done eating my hot dog. I stopped mid-bite. Then, about fifteen minutes later, I got a crushing headache. I didn't forget again.) My kids, though, are fond of the occasional hot dog, and so that's why I served them up tonight.

I saw the Squirmy Wormy concept in the 2010 Taste of Home Halloween magazine. However, they were sandwiches (my kids never eat the bun) and had a bunch of glop mixed in with them (not appealing). So I stole the idea of thin-strips of hot dogs, but ditched the rest. Then I needed sides. I went with baked beans because the ingredients of the aforementioned glop reminded me of the flavor profile of baked beans; plus, I think they look like beetles. I added a salad because, well, GREEN LEAFY VEGETABLES.

Here's how it comes together.

Open can of baked beans and heat through. haha. 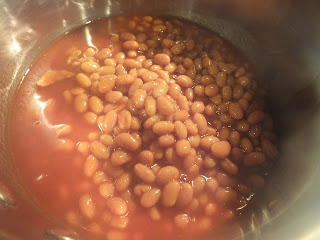 I called them sticky bugs because baked beans have that sweet element from the brown sugar in them.

Cut thin strips down the length of hot dogs. I was able to get about 12-20 strips from each dog by cutting in half lengthwise, then cutting each half into 4 or 5 more long slices, then cutting THOSE strips in half too. Slicing the hot dogs was the biggest time commitment of this throw-together meal. 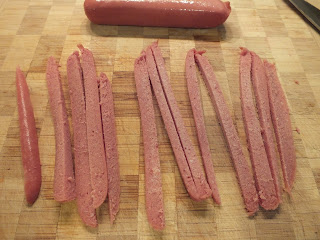 Heat through in a pan. The only thing in my pan is hot dog strips. No added oil. 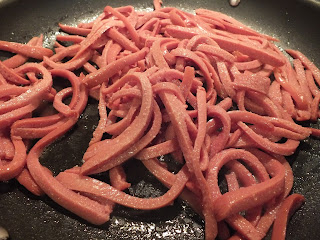 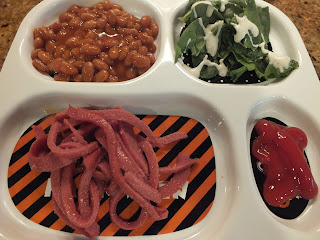 For this one, anticipation was a big part of the fun of things. When I picked them up from school, I told them I'd spent the day in the yard digging up worms and bugs. My younger daughter looked dubious and said, "Well, I'm not sure if I want to eat them, but I'll try them. If they don't taste good, I'll stop eating them." Fair enough.