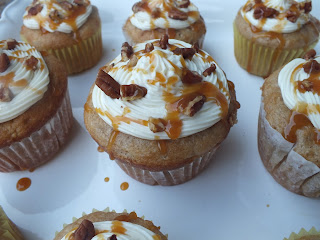 A very merry unbirthday to you, dear readers! (Unless October 22 is your actual birthday, in which case, happy birthday!) Please don't tell me you don't know about unbirthdays. Take a moment and this video shall elucidate. I'll wait.

Welcome back! Now, where was I? Oh yes. Merry unbirthday to YOU.

Today also happened to be my daughter's unbirthday. We celebrate unbirthdays up in here. At random (and with our family it tends mostly to be in the summer since that's our birthday dry season, if you will), one of our family of four will walk through the front door and the unbirthday song will be playing. SURPRISE! There will also be some small gifts (rarely major--usually things from 5 Below or some such, though the very first unbirthday ever, which I threw for my husband about 4 years ago, featured a Cuisineart Grind and Brew coffee pot as the gift.) and some dessert and balloons--always balloons--and, many times, tea. In fact, most of our unbirthday parties are tea parties as per the original concept in Alice in Wonderland. Only on occasion is that not the case. Today was one of those days. Not that it matters; I'm just saying.

Anyway, the song was played, balloons were present (the kittens LOVED the strings), and gifts were opened. And there was dessert. Cupcakes, actually. Caramel apple cupcakes, to be precise. Ah the sweet taste of celebration! (By the bye, celebrating for seemingly no reason is very appealing. You really should try it.)

Whether you feel like buying or skipping the balloons and gifts is up to you. However, these cupcakes are not to be missed.

I first found the inspiration for them from the 2013 Taste of Home Halloween magazine. However, I modified the recipe a fair amount. Such is baking.

Here's how I did mine.

I started off with a boxed cake mix. I like the Caramel Apple kind Pillsbury puts out seasonally, but this would also be tasty with a spice cake or another variety of apple cake. Follow package directions for working with the batter. (Feel free to sub in applesauce for the oil if you prefer cooking light. When I made these in the past, that's what I did. However, despite writing myself a note in the margin, I didn't make that substitution this time because I didn't read my own notes!!! HELLLLLLLLO.) I also like to add in a couple teaspoons of pumpkin pie spice to the batter to spice things up a bit more. That's optional, of course. 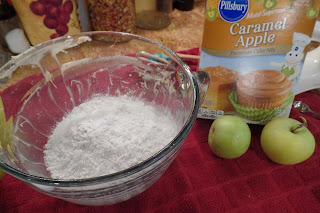 When the batter is ready, peel, core, and chop 2 medium tart apples. 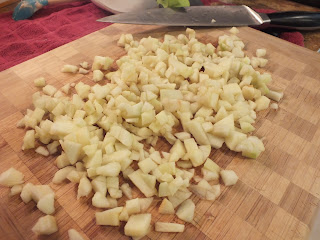 Then fold those into your batter.

If you want jumbo cupcakes, line a jumbo muffin pan with 12 paper liners. Despite being the queen of kitchen gadgets and doo-dads, I only recently acquired a jumbo muffin pan and, alas, it's only a sixer. So I made six jumbos and nine regular sized cupcakes. I used my handy OXO scoop--the large one this time; the one I use when I scoop ice cream--to get a reasonably uniform fill. For the jumbos, it was about two large scoops of batter; for the regulars, it was one scoop. 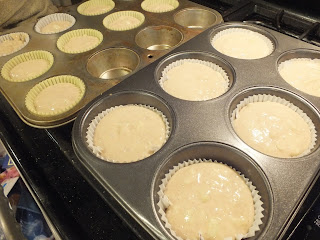 Filled and ready for baking.
PS- Those stupid "jumbo" liners were totally NOT as jumbo as the pan holes. Hence why they're filled to the tippy top. That bugs me.

Pop those bad boys in a 350 degree oven for 20 minutes, or until the tops are set and a toothpick inserted near the center comes out free of crumbs. (My jumbos needed two extra minutes once I removed the regulars.) 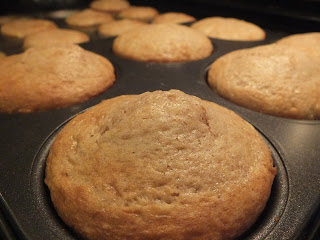 Nice and golden and domed. Beautiful.

Cool for 10 minutes in the pan, then remove to a wire rack to cool completely. If you're in a rush, pop them in the fridge to speed the process along, but DO NOT ice a cupcake before it's cool. That will yield a melty mess. I speak from experience.

Now it's time to decorate them. Because my older daughter doesn't prefer vanilla frosting, I left some of the cupcakes naked. (I've done these cupcakes in the past and used melted Kraft caramels and no icing, which was more in keeping with the inspiration recipe.) For the rest today, I used a store-bought vanilla frosting (which is far inferior to homemade frosting) which I scooped into a freezer baggie and piped onto the tops of the cupcakes in a spiral fashion using a piping tip. I didn't want to use too much icing on each one, but did want to sort of mimic the creaminess of ice cream on top. Then I dotted my frosting with chopped pecans (toasted always tastes better, but I didn't do it this time) and drizzled caramel on top of that. 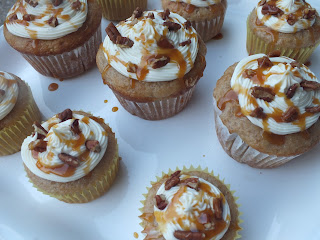 Enjoy! And no worries if you don't have time for an unbirthday party today. Just do it tomorrow! (Unless October 23 is your actual birthday, in which case, happy birthday!)