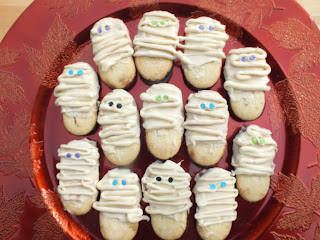 I've been fascinated with mummies since I learned about the ancient Egyptian preservation and burial process in school. (I found a video which explains the process here.) In middle or high school, I read Anne Rice's The Mummy which I remember enjoying immensely except that she ended it "to be continued..." and there was never a continuation. That was (and continues to be) a bummer. I think in part because of that book, one of the things I was most gung-ho to do when I visited London was visit the British Museum's Egyptian wing. Alas, that, too, ended up a bummer because the bulk of the exhibits I was interested in seeing were closed when I was there. (Also? Lots of people who visit the British Museum don't wear deodorant. Unfortunately, they have that in common with some people at my gym...Yuck.)

I can't say I've ever given any thought to mummies as they relate to baked goods (in general, preserved baked goods are not a good thing. You don't have to take my word for it, though. Mr. Peterman told Elaine Benes...), but there's a first time for everything, right? So today I have another simple store-bought cookie all dressed up for Halloween. This year, we've got Nutter Butters going as giant toes, and now the Milanos are going as mummies! Hurrah for treats that aren't even tricky.

This is so simple that all I saw was a picture of these somewhere--either in a magazine or on Pinterest, I can't remember--and I was able to figure them out for myself.

Here's what you need:

Here's what you probably don't need:

But just in case, here goes.

Melt the candies in a microwave safe bowl according to package directions. Meanwhile, line a pan with a piece of parchment or waxed paper and set aside.

Once candy is melty, hold a cookie and dip it into the goo. Cover about 2/3 of the cookie. Oh, but be careful and work quickly because the chocolate inside the cookies will melt, thus making the brown color bleed a bit, when it hits the white candy. At first, that freaked me out because I was thinking, "Oh no! These have to be white!" Then I realized, "Wait, mummies totally discolor. Pure white is unrealistic." What ended up working for me is using a spatula and/or my clean finger and painting/smoothing the white melt on both sides of the cookie.

There will be white candy melt remaining. Put it back into the microwave to loosen it up again and then carefully spoon it into one corner of your freezer bag. (Be careful-- it's hot.) Use scissors to snip the tip of the bag just so it leaves a teensy opening. Squeeze gently over cookies moving quickly in a side-to-side or long snake motion to mimic the mummy "wrapping." While still wet, press two candies in place to serve as eyes.

Work as quickly as you can because the melted candy in your bag can firm up if you pause too long in your action. 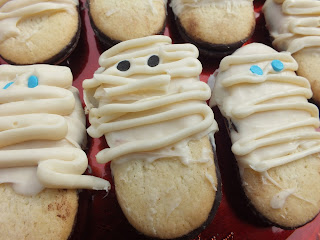 As soon as they're set, they're ready to eat. Usually, that's not too long after you wash the bowl you used for your dipping. If you want to speed the process along, feel free to pop them in the fridge.

But don't expect them to last as long as real mummies-- these little guys were gobbled up faster than you can say "King Tut." 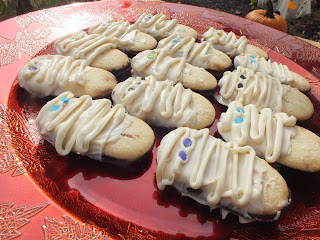