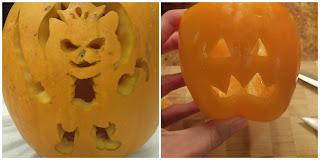 Last night was CARVING night at our house. We carved our pumpkins and to help the girls feel extra enthused for that activity, I made a centerpiece of our dinner in an adorably carved orange pepper! (My friend sent me a stuffed pepper recipe a few days ago which featured the carved pepper idea. I used the concept though not the recipe.)

Therefore, to help you feel extra enthused for this post, I'm giving you a two-fer. You get a recipe for the stuffed pepper AND you get to see my family's carved masterpieces. Happy day!

I grew up eating stuffed peppers because it's one of my dad's specialties. He uses rice, ground beef, cheese, peppers, onions, and diced tomatoes. They're delicious.

For as much as I enjoy eating them, though, I rarely bother making my own. For one thing, we don't eat a ton of ground beef at our house (we routinely sub ground turkey for things like tacos), and for another, I've always been more partial to the stuffing inside the pepper than the exterior pepper in which all the goodness is stuffed. (Also, my dad always makes a ton and gives me some, so it makes no sense to cook my own if I can get the good stuff done for me, right? Thanks, Dad!)

That said, a few months ago, I adapted a recipe I found on Pinterest for a One-Skillet Mac and Cheese with Sausage and Bell Peppers. When I took my first bite, it reminded me very much of my dad's stuffed peppers, and I knew it was much less labor-intensive than his recipe. Win-win! Turns out everyone in my house loves it, too, so I've made it several times since. Including last night when I stuffed some of it into a carved pepper.

Here's how to do it.

For the jack o' pepper part, you'll need an orange pepper for every pepper you want to stuff and serve. As I noted, I only actually stuffed ONE pepper because I like the stuffing and I knew my kids wouldn't eat the plain pepper (even though they enjoy eating raw peppers, they wouldn't eat this much of a pepper in one serving.)

Slice off the top of the pepper and save the lid, and remove seeds from within the pepper. 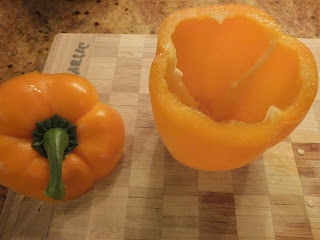 I know this one looks kind of yellow-ish in the photo, but I promise it's orange

Carve a face using a small, sharp knife. Here's a tip: carve your face closer to the top of the pepper than I did mine. When my little guy was stuffed, he was sort of looking down. 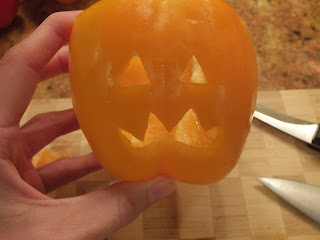 You can do one of two things with your peppers now: blanch them for 5-7 minutes before setting aside, or skip the blanching and set aside until later. What the blanching does for a pepper you're planning to stuff is help to partially cook it and cut back on the raw taste and crunch of them. When they cook, they get slightly sweeter and softer. I didn't bother blanching mine because it was only one pepper. (For what it's worth, my dad blanches his and often does NOT bake them at all.)

Set the jack o' pepper aside and let's get to the good part: the stuffing!

Over medium heat, brown 1 pound of sweet Italian turkey sausage (you could use pork sausage, too, if you prefer) in a large skillet (I use a 12" non-stick). Keep in mind this is the only skillet you'll be using during this recipe so make sure it's big enough AND has a lid. 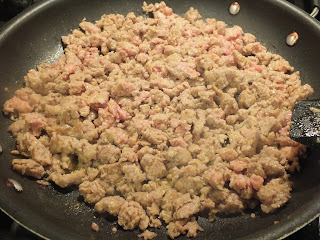 Obviously not done yet because there's still some pink.
I always use Shady Brook Farms turkey sausage links for this. I remove the casings and just use the meat.

While that's cooking, dice up two peppers (any color). I used yellow and red. 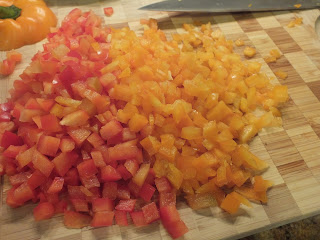 You'll also need a 24oz jar of your favorite marinara sauce (I always add 1/2 teaspoon of salt and 1 teaspoon of sugar to my sauce to round out the flavors and cut the bitterness I sometimes taste in jarred sauces), 12 oz water, and two cups (half a standard one pound box) of elbow macaroni. 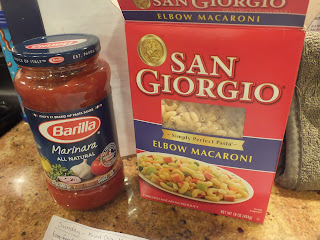 When the meat is brown, drain any liquid that may be in there. (When I use the turkey sausages, mine rarely has excess water.) Add the peppers, sauce, water, and dry macaroni to the drained meat. 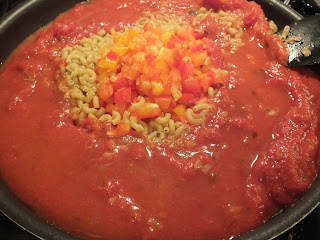 It's getting crowded up in here. This is why you need a big pan!

Stir to combine, then bring to a boil. 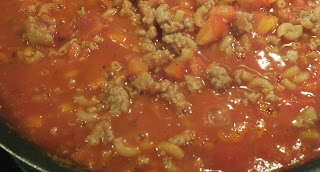 Look at those beautiful bubbles! (Do you know how hard it is to capture bubbles in photos? Quite a challenge!)

Once it's doing its bubbling thing, give it a stir, pop a lid on it, and lower the heat. Simmer for 20 minutes or until pasta is cooked. It's a good idea to stir it a couple times while it simmers so nothing sticks to the bottom of the pan.

At the end of the 20 minutes, stir it again, then add 1/2 cup of half-and-half. (I'm sure you could substitute whole or even 2% milk for the half-and-half if you're in a pinch. It'll just lesson the creaminess a tad.) 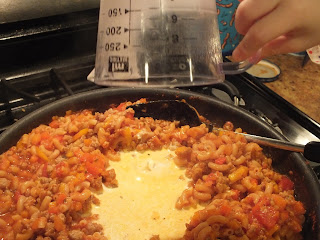 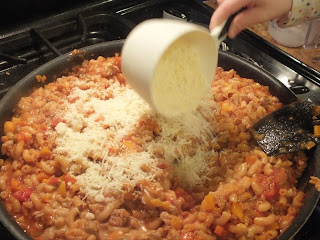 These additions are perfect work for little helper hands!

Turn off the heat and stir to combine. It's ready to serve when the cheese melts. Usually that's after a minute or so.

If you are making this on a regular night and stuffing nothing, you're done and can eat up. Nom nom nom!

If you are stuffing a pepper or a jack o' pepper, now is the time for that. Fill the pepper with the stuffing, give the little guy his hat topper, and arrange in baking dish. Cook in 350 degree oven for 15-25 minutes or until pepper starts to soften. (I did mine for 15 and the pepper still had a bit of a bite to it. Had I blanched it first, it would've certainly been done at that point.) 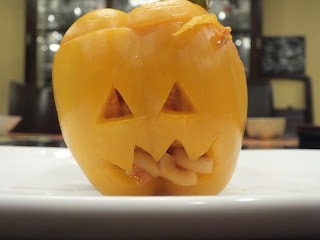 Here he is. I like how the noodles are coming out of his mouth-- they almost look like teeth!

After we enjoyed our dinner, we brought our pumpkins in from outside and set to work.

I took care of cutting the tops off of my daughters' pumpkins, but they scooped out the guts on their own. Then they used a marker to draw the faces of their jack o' lanterns. I did the cutting for my younger daughter, but I let my older daughter try her hand at carving this year. Hers is entirely her own work! As for me, I used a template from one of those grocery store pumpkin carving kits. I chose the kitty pirate in honor of our new kittens and because my younger daughter and I are being pirates for Halloween this year.

My husband, as always, carved a classic jack o' grin into the largest pumpkin he could find at the patch.

Here they are, all lit up! 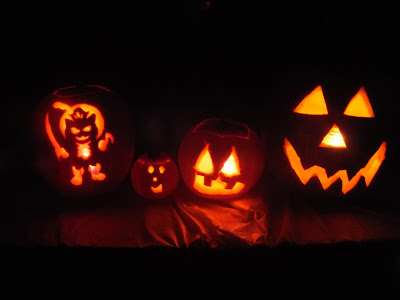