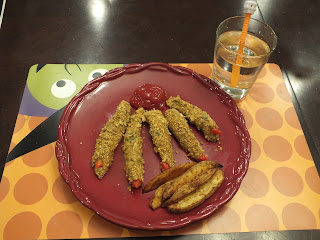 For dinner tonight I cooked up a whole meal of finger foods! Haha. Get it? Oh, folks, we're here all month... Anyhoos, we've got some baked monster claws and oven fries, served with a side of blooooood. And all of it was delicious.

My daughter's friend came over to play out back while I was cooking this one. He seemed pretty impressed by the finished product. Amidst the play, he meandered inside a couple times and sampled some of my other gruesome creations, namely a toe and a sliver of the dark side of the moon. As I told him about a few of our other theme items, he said, "That's really cool that you make all this stuff." High praise from a 7 year old, particularly as he isn't related to me and doesn't need to say that. It made my day!

I found the recipes for this meal in two different magazines -- 2010 Taste of Home Holiday Halloween featured the monster claws and the 2013 Taste of Home Special Editions Ultimate Halloween magazine contained the oven fries. Both recipes turned out really well.

Let's talk fries first, shall we?

You'll need 4 medium potatoes, washed. I think my potatoes were bigger than "medium" but oh well. 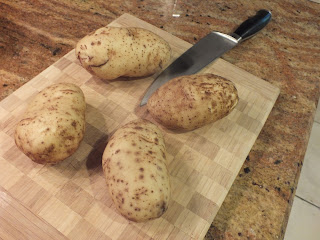 Yeah. Those are some big bakers. Oh look! That top potato has a little face. He looks like a cat or a teddy bear. Aw.
He's smiling now because he doesn't realize he's about to get sliced in two. Yikes! 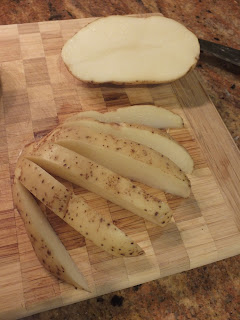 Put your potato wedges in a large bowl, then add the following and toss to coat.

Once the potatoes are coated, transfer in a single layer to a large rimmed baking pan coated with cooking spray. 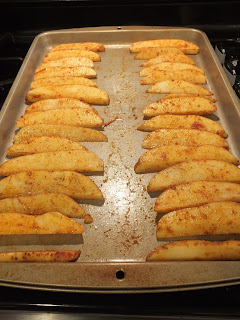 Pretty maids all in a row!

Bake at 400 degrees for 22.5 minutes, then flip wedges and bake an additional 22.5 minutes until tender and golden. 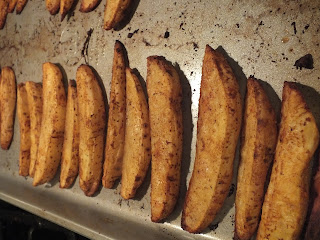 Crunchy on the outside, fluffy on the inside, and seasoned to perfection! I'd definitely make these again.

Now for the claws...

They're chicken tenderloins seasoned with Cajun seasoning and coated in cornflake crumbs. The nails are red peppers (though the original recipe called for yellow peppers. I think any color pepper would work here.

The original recipe--you can find that here--calls for 1 pound of chicken breasts and yields 15 appetizers. However, I modified the amounts to make a dinner-sized portion. I started with 1.68lbs of chicken tenderloins which I cut in half lengthwise to be thinner fingers. Since I increased the chicken, I also increased most of the other ingredients.

Here's the amounts I used and they worked out perfectly.

For the dredge-- this fully coated my chicken and there was almost none left over
4 tablespoons all-purpose flour
2.5 tablespoons Cajun seasoning

I didn't increase the 3 beaten eggs. 3 was a perfect amount for my chicken.

I pretty much followed the recipe directions otherwise. Again, I linked to the recipe above. In essence, it was just like making any other homemade breaded baked chicken finger.

In case you'd like the overview...place chicken in a large baggie with the flour mixture and shake to coat. Then dip the coated chicken in the egg. (I did this today in a really deep bowl and it worked out beautifully since I could dip the chicken and flop it along the side of the bowl to get off some of the excess. Usually I work in shallow bowls but this was way more convenient.) Then put the eggy chicken into the crumbs to coat. Place the breaded chicken on a greased baking sheet and bake at 350 degrees for 15-20 minutes or until juices run clear/the meat inside is white and not pink. Mine was done around the 18 minute mark, but I left it in the full 20 because nothing grosses me out more than underdone chicken, even when I know it's cooked through. It's kind of a thing with me. On the bright side, even being in the full 20 minutes, the chicken was nice and tender. Score. 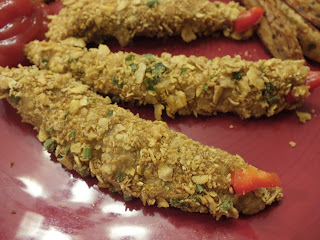 Cut tiny triangles out of the pepper and insert them in a small slit you cut at one end of each claw. This is one time you'll encourage your kids to bite their nails. Wink wink.

Now, for plating. This meal is all about the presentation. I used a blob of blood (ketchup or BBQ per your taste preferences) as the "palm" area and then arranged the claws reaching out from there.

I served the claw reaching TOWARD my diners, like so: 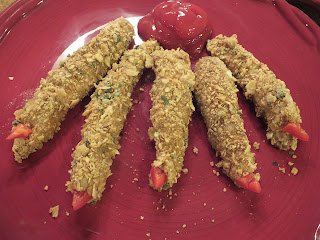 It took up most of the plate, so I added the fries in front of the hand as in the photo at the top of the post.

This one was a real scream.
Posted by Natalie M at 9:41 PM