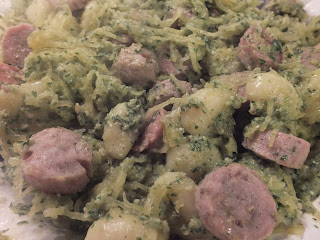 Another day, another purposely gross-looking dinner...
I don't know about you, but I'm exhausted today. Both my kids are under the weather (maybe it's a worm-born virus? ha!) and our adorable newly adopted kittens like to play at very inopportune times, especially in the 5-6am hour. Ergo, the past few days, my sleep has been less than uninterrupted. Boo. 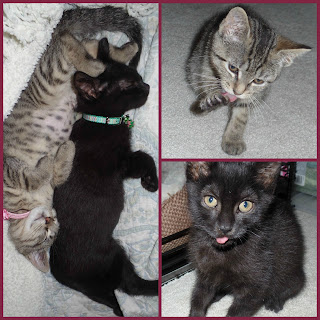 But they couldn't be cuter, could they?! I love them!
Still, the show must go on and so today I've got an easy, relatively good-for-you meal that's filled with vegetables and looks almost too gross to eat!

I saw this gnocchi and spaghetti squash with pesto in--you guessed it!--the 2010 edition of Taste of Home Halloween. In the magazine, it was being served as a side dish and featured classic basil-pine nut pesto. I used that recipe (and the name) as my inspiration here but modified it because I wanted to serve this green muck as a meal.

Thus, I added sweet Italian chicken sausages for protein, and used my own recipe for a spinach-mint-walnut pesto.

The good thing is that the whole affair came together in under thirty minutes, particularly as two of the main ingredients--the gnocchi and pre-cooked sausages-- require little more than warming through. Plus, if you were REALLY pressed for time, you could even use a jarred pesto. 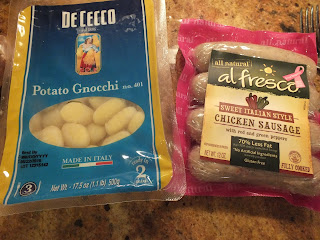 Here's the gnocchi and sausages I used tonight

Let's run through the procedure for this one, 'kay? 'Kay.

Here's mine with the stem lopped off, cut in half, and seeded. (To remove seeds, simply scoop those babies out with a spoon.) 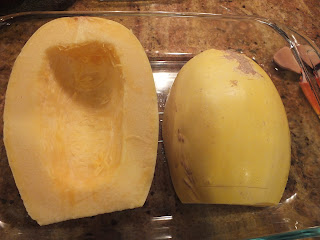 You can cook your squash in the oven or the microwave, depending on how much time you've got. (I just found this post with video that does an excellent job explaining the process. Score.) I usually cook mine in the oven cut-side down for 30-45 minutes (depending on the size of the squash), but this time I tried using the microwave, and it was slightly over-done (a touch mushier than I prefer) at 20 minutes. Next time I'd stop it by 17. Trial and error, people; it's all part of the world of cooking.

While the squash cooks, you should do three things:

1. Bring a big pot of water to boil. The gnocchi need a 2-minute plunge later. 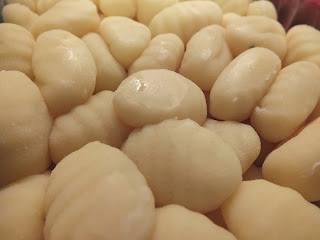 2. Slice your sausages into bite-sized rounds. (I also always remove the casing of my sausages no matter what kind I'm using, regardless of whether they're allegedly edible. To me, casings equal grossness. But that's your call.) Heat through in a pan or in the microwave.

3. Make your pesto. This is where you're packing veggies and healthy fats into this meal.

Put all that goodness in a food processor and pulse to chop. Then, with machine running, stream in 1/4-1/2 cup of extra virgin olive oil until pesto is smooth (but should still have some texture.)

When the squash is done cooking, give it a few minutes to cool so you can handle it. Use a fork to gently scrape the insides of the squash flesh which will release in spaghetti-like strands. (Please note: this isn't a special cutting technique or anything. Cooked spaghetti squash naturally comes apart in  thin, spaghetti-like strands. It's glorious!) Scoop into a large serving bowl. 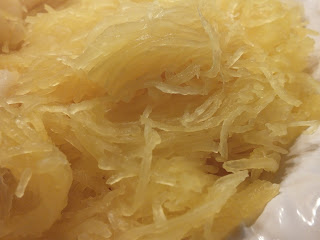 The spaghetti-like strands of a spaghetti squash are a thing of joy even when we're pretending they're spider webs...

Place gnocchi in salted, boiling water. Remove when they float to the top of the water-- after about 2 minutes. Put those bad boys in with the squash and sausage.

Top all of that deliciousness with the fresh pesto. Toss to coat. 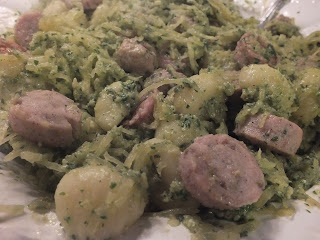 Looky what the spiders dragged in...

I know, I know. It looks disgusting. But that's the point. Tis the season...
Posted by Natalie M at 6:30 PM