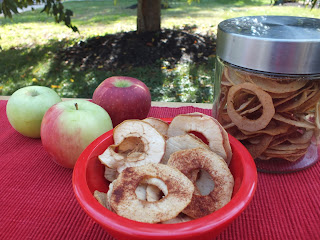 Today was a beautiful fall day.

I took the girls to the park and we explored. After they went down the slide a hundred times (and I tried it once), we walked along the stream, crunched through fallen leaves, and made wishes at each bench along the walking path (because, why not?) I assume the breeze and nip in the air kept most people away because the place was deserted except for a thin Santa Claus-looking fellow and his poodle who appeared toward the latter end of our jaunt, but that was nice for us because it felt like our own little slice of heaven.

Speaking of slices of heaven, I've got another apple recipe for you today involving slices of apple. Thin ones. Baked low and slow. Homemade apple chips for your enjoyment.

Wait'll you see how easily these come together.

It starts off looking a lot like making an apple pie.

Core, peel, and slice your apples. Though I've seen recipes wherein you don't core them, instead only removing the seeds once you slice them, I vote for coring them. My issue with not is I hate the hard flesh thing going on in the center of the apple core, you know, the part that sort of protects the seeds. I always seem to bite down on it in apple treats where apples weren't cleanly cored and it's unpleasant. True, they don't look as pretty cored, but this is an instance where the taste and texture, to me, trumps the look. That said, I vote to core them. And in this instance, I would definitely recommend using the apple corer and not using the quartered bias-cut method I offered as an option in yesterday's post.

You also have the option of leaving the skin on your apples for this, but I experimented by doing so with one apple and I didn't prefer the texture of the skin on them. That's up to you, however. Certainly leaving on the skin will up your fiber if it's fiber you're after. As for the slicing, I used my mandolin for this. If you don't have a mandolin, you could use the thin-slice method I discussed yesterday, but a mandolin made quick work of this for me. I loves me a kitchen gadget! Corer, mandolin slicer, ergonomic peeler
How many apples should you use? It depends. How big are your pans? How thick are your slices? How big are the apples? I used 3 standard sheet pans with rather thin apple slices cut from small to medium sized apples. (I also have a double oven so had extra space. If you have a regular oven, just stick with 2 pans worth.) Mine was 9 apples. I'd say start with 3-4 medium apples and add from there.

Line up the slices on your parchment-lined pans. You'll see in the photo below that I used my beloved Silpat mats on two of my trays. But guess what? The apples dried out better on the third pan which was lined with parchment. Hence, I'd suggest going that route from the onset. 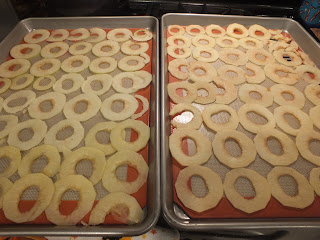 (Optional!) Sprinkle top side of apples with cinnamon-sugar. This is another case where you should taste your apples first to determine if they need added sugar. Most of my apples were sweet on their own and I chose not to add anything to them. The third tray was made with a more tart apple and so I sprinkled some on those. The choice is yours. 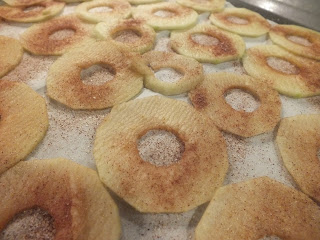 Pop the trays into a 200 degree oven for an hour. After the hour is up, flip the chips over and bake another 1-2 hours. Keep them in the low oven longer for a more crisp chip. I ended up leaving mine in there even after I'd turned off the oven and it cooled. (*Don't store them in their airtight container until they're cool or they'll soften up.) 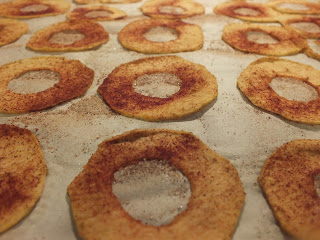 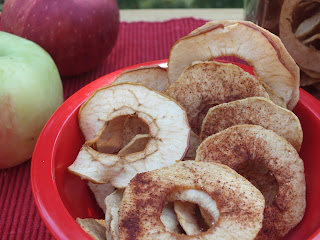 Some with skin, some with cinnamon, some in their natural state

No matter how you slice it, these are a delight!
Posted by Natalie M at 9:17 PM