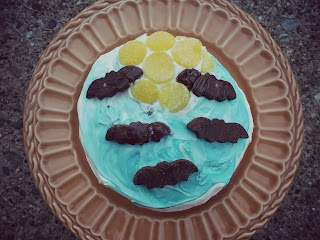 It's Sunday. Let them eat cake.

A flying bat cake, to be specific. (Whenever I hear the word "bat," I always think of this song from Sesame Street.)

The inspiration for this confection came from my trusty 2010 Taste of Home Holiday Halloween magazine, though I changed lots of stuff. For instance, the original recipe called for a carrot cake made in a 10" spring form pan, had a cookie crumb coating around the vertical edges, had cookie bats, and had no special moon.

However, I made a 6" chocolate cake, skipped the crumb coating, had brownie bats, and created a candy moon. That's the beauty of using recipes as inspiration-- you can modify to suit your needs.

My needs began with that immediate downsizing since, let's face it, we do NOT need any more desserts in this house. Since I keep making them, the least I can do is make them smaller.

Turns out Duncan Hines now sells handy dandy cake mixes which come with a pan (made of cardboard) in which the cake gets baked AND with frosting mix (yes, it's a powder like the cake mix, though I didn't use that this time since it was chocolate and I needed something white.)

I made the chocolate cake according to package directions and here's what it looked like fresh from the oven before it was decorated: 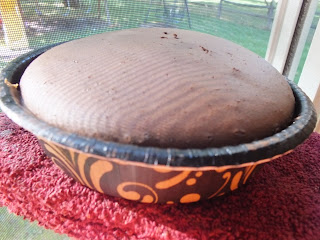 Nice and fluffy! Sorry for the shadow from the screen behind it.

After cooling 15 minutes in the pan, I removed it to the serving dish at the top of the post to cool completely. I put it in the refrigerator to speed along that process.

When it was cool, I frosted it with white icing. You can use whatever flavor you prefer. I used a new kind I found last night at the market--vanilla marshmallow. Yum.

I do sometimes make my own frosting. Raspberry buttercream is my favorite, though classic vanilla buttercream is a delight, as well. As are the dark chocolate and nougat flavors I make to go on the amazing Snickers cake I make...ooooh so good. Perhaps someday I will share those with you.

But, sorry, today is not that day. Just as it was not the day for me to make my own.

After frosting it with the store-bought white icing, I grabbed a tube of gel food coloring and put ONE DROP (that shiz is concentrated!) of the teal color on the edge of the cake and used my frosting tool to swirl it around to make a night sky. I left a round spot to serve as a moon.

As I mentioned, the original recipe called for "soft chocolate cookies" to be cut out in the shape of small bats. My market didn't have any such cookie (at least not that I could find) so I improvised. I bought my older daughter's favorite junky Little Debbie Bat Brownies, cut one in half so it wasn't so thick, then used my mini bat cookie cutter to cut out five bat shapes to fly in front of the moon. Done and done! 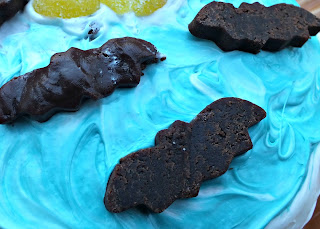 The inspiration cake stopped there. (Well, that's a lie. It included those cookie crumbs on the outer edges, but ain't nobody got time for that. <-- Seriously. Watch it. It's hilarious AND catchy!) Since I wanted to play up the fun of the moon, I used two yellow gumdrop candies cut into slices and put them in the open white space. 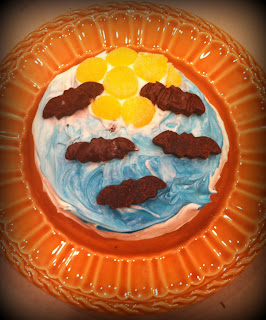 This is actually the same plate, but I used my cell camera to snap this picture in the house under bright kitchen
LED lights. Interestingly, in person, the plate resembles the mellower tone in the following picture and not the
vibrant orange you see here. Isn't the change in lighting wild? Photography is cool! 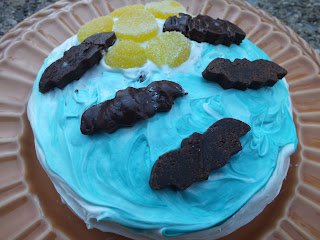 Ok then. That is all I have to say about this cake. I have to go get into my pajamas so I'm ready to watch the season premier of the best show on television: The Walking Dead!