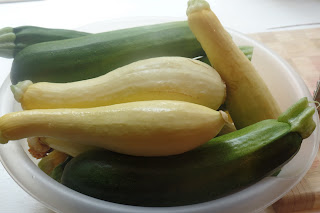 It's summa-time, y'all! (Says the non-southern gal with a great deal of zeal.)

And you know what summer means?

BBQs, swimming (that's right, 'cause we got a poooooooool and it's amazeballs!!!), heat, humidity, mosquitoes, mosquito-borne-illness hysteria (turns out my germaphobia extends to encompass this type of thing as well)... oops. I got off track there. I was going for an excited vibe and messed it up. Je suis tres desole.

Anyway, summer also means summer gardens! And in our summer garden there is squash. Lots and lots of squash. Both green zucchini and yellow crookneck varieties. (Though I must admit, I have a habit of calling it all zucchini because it's easier. So don't be confused if I use the term interchangeably.) We harvested the first batch a few days back and had 5 zucchini and 4 crooknecks. I harvested again today and doubled our stock. There's plenty more on the vines. We're at zucchini overload!

My husband was all, "Wow. What are we going to do with all this squash?" But I didn't hear him because I was already busy searching through Pinterest. (Dude, are you on Pinterest? I LOVE it. It's my absolute favorite online tool. I love frittering away an hour here or there, gathering recipes or ideas or, dare I say, *inspiration* to save for later. It's so convenient!) And man o man o man, did I find recipes! Not just for side dishes, but for appetizers, dips, soups, stews, entrees (zoodles, anyone?), and sweets! Who knew?? I pinned everything that looked interesting or tasty, and decided to hoard all of our harvest and try everything I can try. Then I thought, hey, this would make a fun blog series.

So here we are.

Today I was in the kitchen for many, many hours (it was good timing because it was a fairly dreary day out today, so staying indoors was no great trial. The negative of the overcast weather, though, is that my food photography is on the dark side. Eek!) and made an appetizer, a dip, and a dessert, all with wonderful results. I have plans tomorrow for another dessert and a side dish. I'm excited! I'll only blog one recipe at a time, but at least this way you know I've got an arsenal which you'll see eventually.

Like I said, I found most of these recipes through Pinterest, so I'll always link back to the original source so you can see what I saw and the original author can get the credit she deserves. However, on this page I'll type out the recipe as I actually executed it, since I did some adapting along the way.

Let's get our zucchini series started with a little snack item I found at Mel's Kitchen Cafe blog. It seems fitting to start with these because not only were they the first thing I officially tried, but they're also a nice "starter" type item.

Yield: 19 bites (the original recipe claimed a yield of 2-3 dozen with 1 Tablespoon scoops, but I used my small OXO cookie scoop which only holds 2 tsp -- versus the medium scoop which holds 1.5 T--and only got 19 uniform bites. So, yeah...)

1 1/2 cups packed, grated zucchini, wrung out to remove moisture (I measured mine after I removed the moisture)*
1 large egg, lightly beaten
1/3 cup shredded sharp cheddar cheese (original recipe called for 1/4-1/2 so I decided to split the diff)
1/2 cup seasoned panko (original recipe called for 1/4 only, but I thought the mixture looked too wet so I added another 1/4 cup and it worked well; you could also use regular breadcrumbs instead of panko)
2 tsp fresh basil (if using dried basil, you can use 1/4 tsp)
1/4 tsp garlic powder
1/4 tsp salt
1/8 tsp black pepper

* How many zucchini does one need to get 1.5 cups grated zucchini? Depends on the size of your zucchini. I used about 4 medium sized zucchini to get around 3 cups of grated zucchini and squeezed it to remove moisture. (It was a little more than the amount I needed for this recipe and a dessert I was also making.) I just searched online and found this cool site which might help you convert for your own needs.

1. Preheat oven to 425 degrees and line a rimmed baking sheet with parchment. (You could also spray non-stick cooking spray on a rimmed baking sheet. I tried it both ways to experiment. If you skip the parchment in favor of only spraying your pan, be aware that your bites will brown faster because there's no barrier between them and the pan. If you like things crispy/slightly charred, you'll prefer this method. But for more even cooking and no blackened edges--and easier cleanup--go with the parchment.) Set aside. 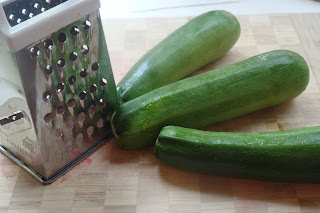 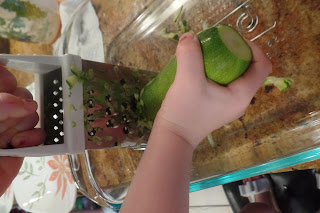 (I let my younger daughter help with this step, though I made her stop halfway through so she didn't grate her skin.) 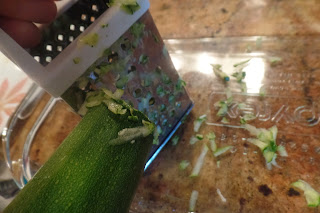 3. Lay out a lint-free towel (I prefer a towel to a paper towel for this task because the paper towels can rip apart and/or get paper in your veg) on your counter and put your grated zucchini onto it. Twist the top of the towel so it's closed, and squeeze/wring out the moisture from your zucchini. (Obvi, do this over a bowl or the sink.) There's a lot of moisture in there-- don't be surprised or alarmed by it. After removing the excess moisture (it's green, by the way!), measure what you need. 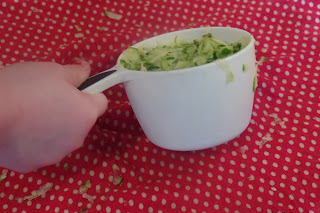 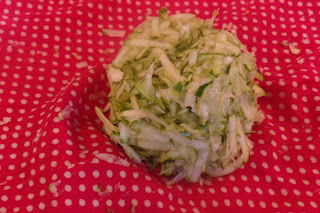 4. In a medium bowl, add all ingredients and stir to combine. 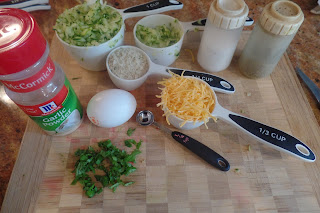 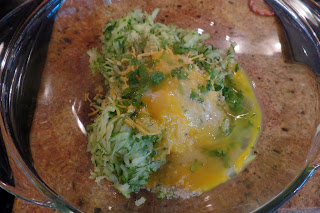 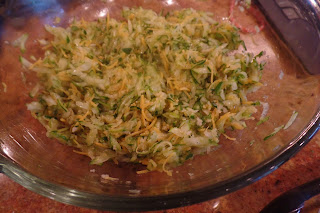 5. Using a small OXO scoop (about 2 tsp per scoop), drop zucchini mixture onto prepared pan, about an inch between each scoop (I fit 16 on a large sheet pan) and press gently with your fingers or the back of a spoon to slightly flatten. 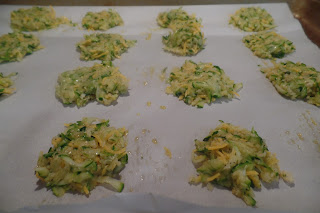 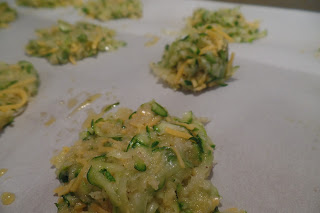 I left one in a mound for visual effect, but the others are flattened

6. Bake for 16-20 minutes (mine took about 17) until golden at edges. Remove from oven and let cool on pan for a couple minutes before enjoying. 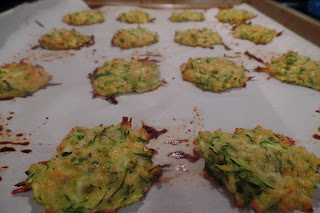 These were a big hit. They were coming out of the oven right as my older daughter was returning home from a movie date with a friend and her father. I paraded the tray into the room as though I was catering a wedding (ok, well, I wasn't wearing gloves and I'd only put the zucchini bites into a 13x9 Pyrex baking dish so it wasn't exactly a WOW display, but whatever) and my husband, my daughter's friend's dad, and both my daughters all had one. Then immediately reached out for another. My older daughter--who claims not to like zucchini, though I have a secret mission to bring her around over the course of the series--liked the smell of them (baked cheese, yo!) which is what piqued her interest. As she finished her 4th zucchini bite, she turned to me and stated, "Wow, Mom. I don't even prefer zucchini, but these are delicious. I like these a lot." Score for veggies!!!

We enjoyed them midday. It was a post-lunch, pre-dinner type situation wherein we legit just stood there and snacked on a few of them as though we might have stood around munching on chips or pretzels. (Only without guilt and with me encouraging my kids to have another instead of snatching away a bag...) Snack aside, I think they'd be a nice appetizer or even a side dish with dinner, if you're wondering when/how to serve them. Pay attention to that yield, though. Because our entire dish of 19 bites was gone in under ten minutes. (I'm serious.) So maybe double the recipe.