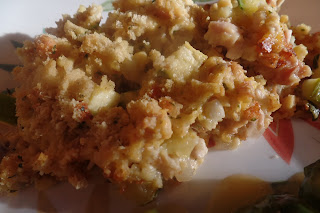 Today was one of those days I didn't so much feel like cooking, yet I was ravenously hungry by dinnertime.

I cheated by using a rotisserie chicken I bought at the market. I love using rotisserie chicken in recipes--from soups to casseroles to enchiladas, they just make life so much easier. Not to mention, at only $4.99 a pop, they're cheaper than (or comparable to) buying the raw chicken and cooking it yourself. Some days, ain't nobody got time for that! (Dude, I still LOVE this video.) My rotisserie chicken gave me around 3 cups of shredded chicken. I used half for today's recipe and set aside half for a chilaquiles recipe I'm making for tomorrow which my older daughter almost certainly won't eat...(I also used the other half of the onion from today's recipe and cut that up already for tomorrow.) It's all about shaving time where you can, people.

I halved the original recipe so that it only made an 8x8 casserole dish's worth. For my family of four, that will feed us and I don't have to deal with leftovers. (Sometimes I want leftovers, but not this week.) Thus, the amounts I provide in my recipe are for the smaller portion. If you want more, feel free to follow the original recipe, but note that I increased the ratio of chicken and soup in my version.

3 oz Stove Top stuffing mix
1/4 cup melted butter
2 cups zucchini, diced (mine was one large zucchini)
1 1/2 cup cooked chicken, cubed (I increased the chicken from half the original recipe- half would be 1 cup, but I wanted it to be more hearty)
1/4 onion, chopped (about 1/3-1/2 cup onion)
1/4 cup sour cream
10.5oz can Cream of Chicken Soup (I used the entire can because half the can left my mixture drier than I preferred)
1/4 cup grated Parmesan cheese (not in the original recipe but, again, CHEESE)

2. In a large bowl, combine stuffing mix and melted butter. Portion out 1/4 cup of the mixture and set aside to use later for topping. 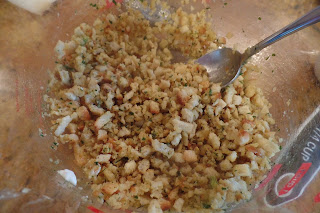 3. In the same large bowl, add to the stuffing mixture the zucchini, chicken, onion, sour cream, and soup. Stir to moisten. 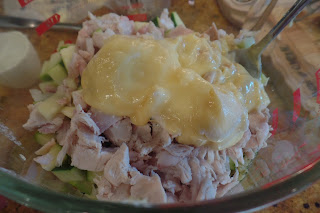 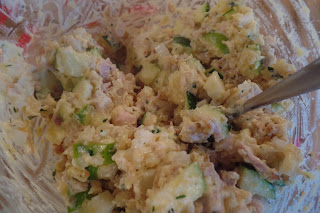 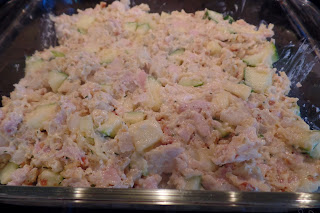 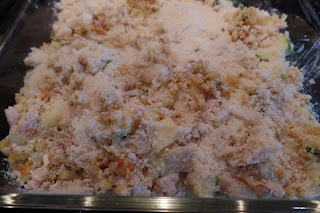 5. Bake uncovered for 40-50 minutes, or until golden brown. Serve hot. 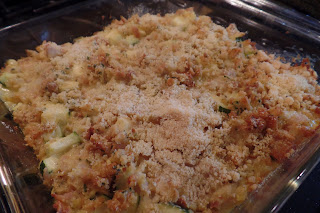 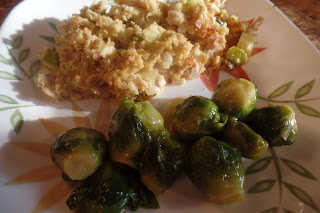 It reminded me a of cross between this Swiss chicken bake and a casserole my mother-in-law makes, though neither of them have zucchini. My husband and I enjoyed it; my girls ate it. (Which, in the scheme of their reactions to dinners, is a win.) Although it would have been fine on its own, I served it with an extra side of veg. I'd planned to go with a romaine salad, but discovered the bag of organic hearts I bought last week had started to rot, so I had to toss them (BOO to waste!) I ended up heating up something from my emergency frozen vegetable stash. I picked my husband's favorite--Brussels spouts--because the poor guy got stung by a wasp--twice!--whilst out mowing the lawn and I felt bad for him. (By the way, if you are stung by a bee or wasp, you can make a paste out of water and baking soda and cake it on the affected area and it really helps ease the sting. I've had this little home-remedy stored away in my head for decades and never had occasion to use it until I was able to bust it out twice in the past seven days! It worked for the poor little kid who got stung--also twice!--on his back because a wasp got caught in his swim vest, and also on my husband's ankle/calf. It worked for me, too, when I was a kid. So well, I guess, that I've never forgotten...)

Anyway, if you're looking for a casserole to make on the fly, this one is a go. Maybe you can even serve it with a slice of yesterday's chocolate zucchini banana bread for dessert... mmm.

Next time, I'll share a seasonal flatbread. Check back to see!
Posted by Natalie M at 10:20 PM