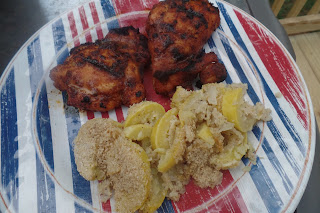 Ever been to Ted's Montana Grill? Well, they've got this squash casserole that's outta this world. It's creamy and rich and the squash is sweet and buttery... I've never known what was in it but always ordered it when I ate there.

So naturally I went searching for a recipe to replicate it at home once I was in possession of the squash mother load. I hit the jackpot when I found this recipe online at ajc.com that, apparently, was supplied by Ted's themselves. (I love when restaurants are willing to share their secrets!)

The recipe I found was already cut back (apparently Ted's makes really LARGE portions to serve the crowds), but I halved it again because I'm only feeding a family of 4 up in here (and I still had some leftovers). The original was also for individual portions but I just made it in one dish. If you need more, go ahead and follow the recipe I linked above since that's for 8 servings.

1 1/2 pounds of yellow squash, trimmed, cut in half lengthwise, then sliced into 1/2 inch pieces (for me, this was 3 squash)
1/2 cup onion, chopped (this wasn't in the recipe provided but I added it and it was nice)
1/4 cup plus 1 Tablespoon unseasoned cracker meal
1/4 cup butter, divided
1/2 Tablespoon sugar
1 teaspoon kosher salt
1/2 teaspoon black pepper
1 egg
1 Tablespoon grated parmesan cheese (this wasn't in the original recipe either, but, uh, CHEESE)

1. Cut squash lengthwise and then slice into 1/2 inch pieces. 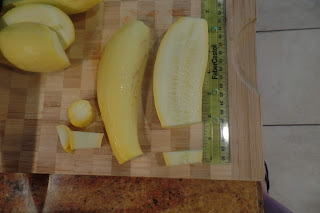 2. Place cut squash and onion in a large saucepan and cover with water. Bring to a boil, then turn down the heat and simmer for 5 minutes. Drain and allow to cool. 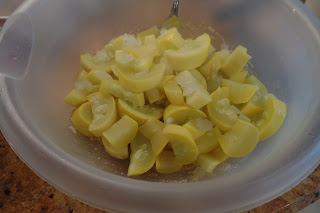 3. Preheat oven to 325 degrees and butter an 8x8 casserole dish. Set aside.

4. In a large bowl, beat cracker meal, 2 Tablespoons melted butter, sugar, salt, pepper, and the egg. Stir in cooled veg mixture (mine was still a bit warm when I combined them, but not so hot that it cooked the egg.) Pour into prepared casserole dish.

5. Mix 1 Tablespoon each of cracker meal and grated parmesan cheese and sprinkle it on top of squash mixture. Then drizzle that situation with 2 Tablespoons of melted butter. 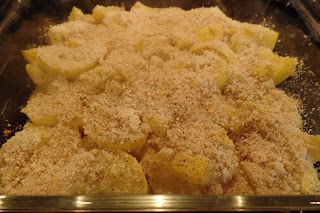 6. Bake about 30 minutes or until warmed through and top crust is golden brown. (I'm not gonna lie. I forgot to set my timer and did lots of prep on the main dish while this baked. I feel like I left it in the oven closer to 45 minutes, but I can't be certain. Sorry about that. LOL. But as you can see, because of the low oven temperature, it didn't burn or anything.) 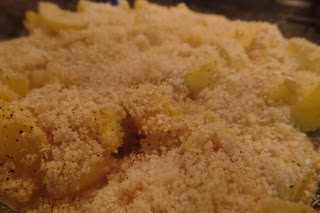 I must say, I loved this side dish at home as much as I always enjoyed it when I ordered it out. And I gave myself a big pat on the back for the fab way it paired with the spicy chicken. The subdued creaminess worked to tame the bold flavor of the protein. For me, it was a huge win.

Sadly, it didn't score as well with the rest of my clan. My daughters ate the required amount (3 bites, no thank you) but wouldn't eat more. (Also, in the interest of full-disclosure, they ate those 3 bites whilst wearing their nose plugs. You know, to block all the flavor from registering... oh, the dramatics!) I gobbled up everything they left behind. My husband ate his, but remarked that he would have preferred plain squash with some butter. Who are these people?! (For what it's worth, he was never a big fan of the stuff at the restaurant, either.)

Despite the mixed reviews, I vote for you to try it. And do yourself a favor and serve it with this chicken! (Yes, it's the one in the photo at the top.) It's FULL of flavor and it rocks. We've had it twice in the past week; it's that good.

Come back tomorrow when I'm going to sweeten things up again. Chocoholics stay tuned...
Posted by Natalie M at 2:19 PM