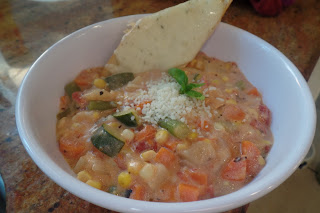 I know summer isn't generally the time for cold-weather fare like stews and soups, but when your garden is overflowing with lovely produce, sometimes you feel like serving it up all in one bowl.

I found this summer vegetable stew at Butter With a Side of Bread blog. I was attracted to it for its versatility-- the ease with which I could substitute fresh for canned vegetables, the ability to add or subtract vegetables -- and, of course, for its use of zucchini. (I mean, we're on a mission, right?)

It was my hope to include carrots and tomatoes from my garden. However, it turns out that, except for two little ones, our carrots didn't take root (is that the proper gardening terminology? I don't know. But since they didn't grow, it seems like the literal definition of what went wrong.) and the tomatoes are still green. 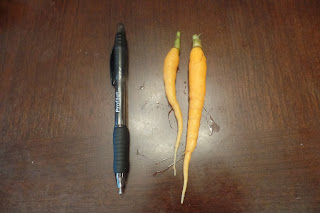 That's a regular pen to show the scale of the teensy weensy carrot crop
No matter. I used a can of fire-roasted diced tomatoes (I mean, if you're going to use a canned veg, it might as well be fire-roasted fancy) and carrots from the produce department of my supermarket. I also used leftover corn from our cookout the previous night instead of the canned corn mentioned in the recipe. And I added fresh green beans since, well, why the heck not? Might as well pack as many veggies in there as possible.

As usual, the most time consuming part of making a soup--particularly a vegetable soup--is the slicing and dicing of the ingredients.

Still, it was worth the effort and hit the spot after a long afternoon dip in the pool.

1 medium diced sweet onion (mine yielded about a cup)
2 cloves garlic, minced
2 Tablespoons butter
1 Tablespoon extra-virgin olive oil
2 cups potatoes, diced (for me, this was 2 medium potatoes)
2 cups carrots, diced
1 cup green beans, ends removed, cut into 1 inch strips (this wasn't in the original recipe but I liked it)
14-oz can chicken broth
1 medium zucchini, diced
14-oz can fire-roasted diced tomatoes (or you can use 2 large fresh ones, peeled and diced)
1 cup fresh corn kernels (or you could use a 14-oz can corn (not drained) or a cup of frozen corn)
1/2 teaspoon marjoram (the original recipe called for "rubbed sage" but I didn't have sage so I made a substitution based on a google search of a comparable spice)
1/2 teaspoon all-purpose seasoning (I use McCormick's Salt-Free All-Purpose Seasoning blend)
1 1/2 teaspoons kosher salt
1/2 teaspoon black pepper
15 oz can evaporated milk -- reserve 3 Tablespoons from the can to set side
2 Tablespoons cornstarch
1/4 cup Parmesan cheese to garnish stew
(Optional per original recipe : 1 cup diced ham or chicken; I chose to skip these) 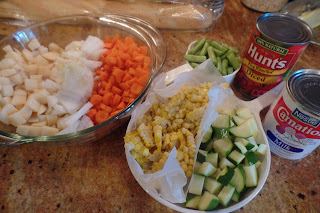 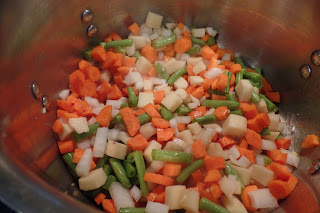 2. Stir in chicken broth. Cover and cook 15 minutes, or until potatoes and carrots have softened. 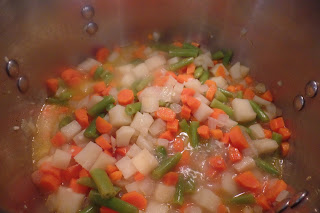 3. Add zucchini, tomato, corn, and seasonings. (If you are using the meat, now would be the time to add it, according to the original recipe.) 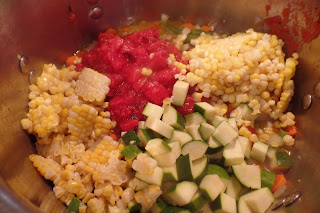 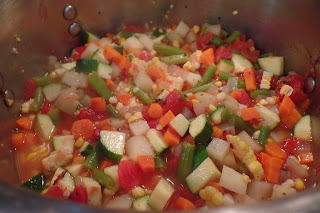 5. Meanwhile, mix 3 Tablespoons of evaporated milk with the cornstarch and stir until no lumps remain. Set aside. (This mixture is called a slurry, and it's going to act as a thickener for your soup, but ensures that no lumps will form. Lumpy soup=gross.) 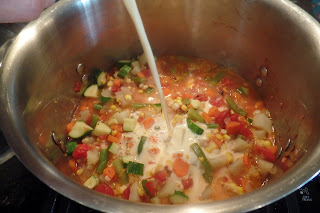 5. Reduce heat of pot to medium-low, and stir in the rest of the can of evaporated milk to the soup. Then stir your cornstarch slurry into the pot.

6. Simmer, covered, for an additional 10 minutes to allow stew to thicken. Stir occasionally.

7. Once you ladle your stew into bowls for serving, top each bowl with Parmesan cheese. (And fresh basil if you have any around. I did, so I used it!) 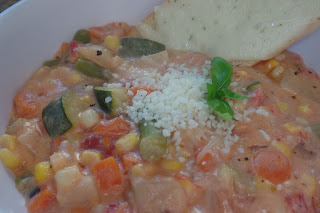 I'd originally planned to have soup and a sandwich for dinner, but my husband happened to buy a baguette at the market the previous night and we didn't eat it. Nor did we properly wrap it up, so it was partially dried out. (Which means it was too stale to eat without heating, but would make a perfect crostini.) I also had some leftover seasoned cheese slices I'd bought to try. I thought...hmmm...open-faced "grilled" cheese/crouton situation? YES! It was the perfect accompaniment to the stew, considering texture, flavor, and portion size. I suggest you try it.

2. Slice baguette on the diagonal into 5 equal sections. Then slice those sections in half lengthwise.

3. Spread a thin layer of butter on the cut side (as opposed to the crust side) of each bread portion.

5. Remove from oven and arrange cheese slices in a single layer atop each section of baguette. (I used a half slice of cheese plus just a bit more on each slice.)

6. Bake for another 3-5 minutes, until cheese is melted but not browned or bubbling.

7. Serve immediately with the stew. 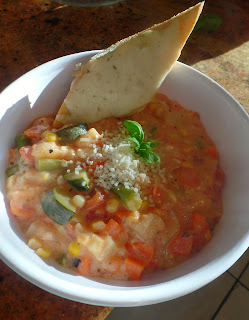 The verdict? My husband and I are in agreement that this meal was tasty. The crusty, cheesy bread was the perfect companion to the hearty, veggie-laden stew. The evaporated milk added just the right creaminess, while the limited liquid and slurry ensured this was a thick stew rather than a brothy soup. I left the table feeling full and satisfied; though, I won't lie, I was hungry again within a couple hours. For that reason, I'd recommend this more as a lunch than a dinner. As for the girls? My soup-loving younger daughter gobbled it up, while my eh-about-soup older daughter ate about half. (And picked around the zucchini...ah well. Some of us are enjoying this series more than others!)

Check back in tomorrow when I try a zucchini-based cookie.