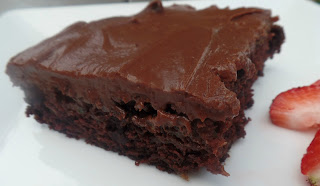 Those of you with your hands up? This one is for you.

It's a brownie. Made from zucchinis.

Take a moment to let that sink in. I needed a moment myself. But--spoiler alert--it works.

The brilliance that is this recipe comes from the Shugary Sweets blog. Aimee's Chocolate Zucchini Brownies (with icing!!!) are an exciting use for your squash. (Turns out Aimee has/had a similar squash situation on her hands which sent her looking for ways to use her overflow of zucchini and she adapted her friend's recipe the way I've adapted hers and yadda yadda yadda, we're all of us in the same boat!)

Yield: 13x9 tray of brownies (the original recipe says she cut hers into 24. That seems about right. I've been cutting as I need them, so they aren't actually uniform size so I can't provide that intel.)

* I used that interesting website to which I linked on Day 1 in the hopes of figuring out how many squash I'd need to yield 2 shredded cups worth. I used the website's weight/size estimation and ended up using 2 very small (5 oz total) yellow squash and one 7.7 oz zucchini. It was just about the perfect amount--just a teensy bit more than I needed. See? 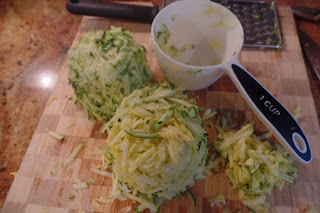 2. Prepare brownies. In a bowl, combine oil and sugars and mix well until combined. (I use a large fork when I make brownies, because it helps me break up the sugar.) 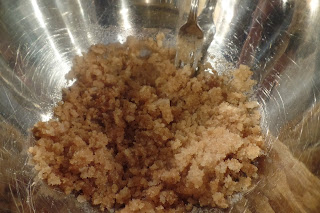 Add in flour, cocoa powder, baking powder, and salt. Stir well to blend. (The original recipe directions note that the batter will look very dry and that it's ok. It does, indeed, look arid and you'll be all "this can't be right..." but it is.) 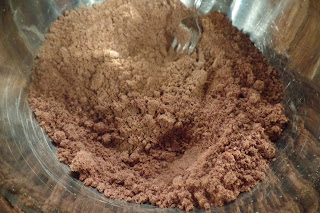 Looks like the desert, right?
Stir in the shredded zucchini. (At this point, even though the original recipe took the time to remark a second time that the dryness or wetness of the batter at this point should not be cause for concern, I was concerned. I was thinking there was no way this recipe would ever work. I was imagining throwing out a tray of hot sand at the end. But I pressed on. And so should you.) 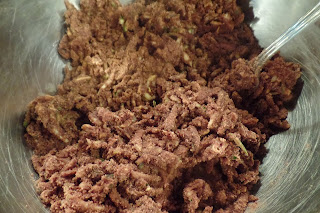 See what I mean? And this is with zucchini which I did NOT wring out! That's full-moisture squash.
3. Pour batter into prepared pan. Press down so it's evenly distributed in the pan. (You'll need to because it's not the normal texture you're probably used to seeing when you bake brownies.) 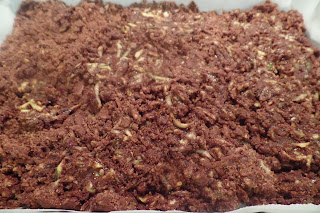 This is not the time to think how this pan of dessert looks like worms in dirt...﻿

4. Bake for 25-35 minutes, or until a toothpick inserted near the center comes out clean. (Mine took 35 minutes.) 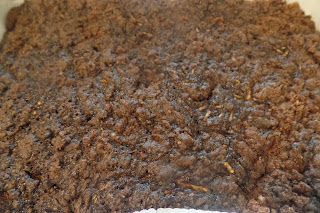 6. Prepare the icing. (The original recipe directed you to whisk the melted butter and cocoa together before adding the rest of the ingredients into it. However, I pre-measured my dry ingredients while my brownies were in the oven, and just whisked the wet ones into them afterward until everything was smooth. It worked. Do as you will.) Spread over cooled brownies. 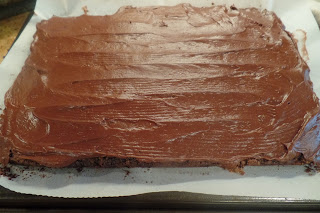 Thankfully, icing covers a multitude of sins...
I was wholly dubious about these. From the sound of them--zucchini in a brownie??--to the look of them--as if the dry batter wasn't bad enough, the bumpy baked-off version didn't look all that much better--I didn't have high hopes.

Still, much like Baby's father, when I'm wrong, I say I'm wrong. (Meanwhile, does it bother anyone else that he didn't technically ever say he was wrong? He just made that announcement, gazed awkwardly at Baby, then told her she's a good dancer. Like, wtf? You're a jerk, Dr. Houseman! Seriously, watch it. And if you don't feel like watching the whole dance--in which case, what's wrong with you???--then just watch 4:30-4:45 of the clip and see what I mean.)

So... I was wrong. The brownies were good. They're on the cake-y side of things (even moreso because of that icing), but the chocolate flavor is pronounced and satisfying. They're moist and chewy and yum. (Except for the occasional bit of crunchy sugar that, because of the lack of wet ingredients to help dissolve the granules, just became crusty inside when they cooked. I don't find them offensive, but I mention it lest you bite down on one and get concerned.) Enjoy them with a big glass of milk! Even better? They seem to get better on the second and third day (they won't last much longer than that, and only lasted here that long because I've made so many other desserts, too.) It's like the chocolate flavor gets richer and the brownie gets chewier. So. Good.

Confession: I lied to my older daughter when she asked, horrified, if there was zucchini in them. I said, "What? No way. Who puts zucchini in a brownie?" Who indeed?

Still, she's the kind of person who thinks if she doesn't like an ingredient on its own that she won't like a dish that includes some form of that ingredient. Which is ridonkulous!

Anyway, sometimes white lies like that are warranted. It would've been more cruel for her to miss out on these things!

Check back tomorrow and I'll blow your mind again with another dessert that will deceive (and delight) your taste buds!
Posted by Natalie M at 2:18 PM