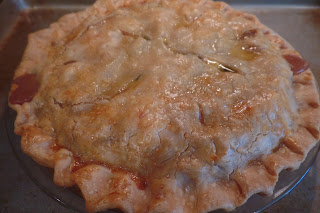 The zucchini keeps growing in my garden, so I keep cooking up squashy dishes. I'll stop when it stops, but not before. Oh no.

When my husband posted the first picture of our crop on Facebook the other day and I said I might do this summer squash series, one of my friends told me not to miss out on zucchini "apple" pie. I'd never heard of this before, but I trust my friend. (Thanks L!) So I took to Pinterest in search of it and there it was.

Zucchini "apple" pie is an apple pie made with zucchinis instead of apples. Yes. You read that right. The whole time I was making it, I couldn't stop thinking how there was no way this could possibly work. That, ok, maybe you could sub in the zucchini and it would be something that sort of resembled an apple pie, but that would never fool anyone eating it (you know, like that cauliflower "mashed potatoes" concoction that people try to say tastes "just" like the real thing but, in fact, tastes nothing like the real thing). Guess what? I was wrong again.

This squash series is tres humbling, I must say.

Anyway, I found the base recipe at The Eco Friendly Family blog. As usual, I made a couple tweaks, but didn't do anything too drastically different because I was so dubious about it working and didn't want to be That Guy. You know That Guy-- the one who takes a recipe and doesn't follow it at all and then gets shoddy results and goes on to the recipe creator's blog and writes this comment: "This was literally the worst recipe for macaroni and cheese I ever made. I subbed out the cheddar cheese and used blue cheese instead, and instead of using heavy cream, I used almond milk. Plus, I was out of macaroni and don't eat carbs so I used spiralized vegetables instead. And instead of baking it, I made it on the stovetop. It looked NOTHING like your picture, was totally runny, and tasted awful! Thanks for nothing." Like, gee, I wonder why it didn't work for you... In any case, yeah.

I wasn't sure when in my series I'd get around to trying it, but I knew I wanted to do it. As it happened, we invited some friends over to grill and swim today. I decided the perfect accompaniment to our All-American cookout would be an All-American "apple" pie. (Which was a big risk since, well, I basically decided I'd serve guests veggie pie, whereas I usually limit my experimentation to the guinea pigs in my own home. Still, I went for it. After all, pies are for sharing!)

So here's what I did.

6 cups zucchini, peels on, seeds out, cut in 1/4 thick slices and halved (the original recipe called for 8 cups; it would've been too much, even with it cooking down)*
1 cup apple, peeled, cored, cut in similar size as zucchini (the original recipe included no apple. In all honesty, you could leave it out. But I was curious to see what it would do in there with the zucchini--would it have a noticeably different texture or flavor when it was in the pie together? The answer was no**
Juice of 1 lemon
1 cup water
8 Tablespoons/1 stick butter
3 Tablespoons flour
1/2 cup white sugar
1/2 cup brown sugar
1/4 cup water
1/2 teaspoon vanilla extract
1 teaspoon cinnamon
1/2 teaspoon pumpkin pie spice (whenever an original recipe calls for nutmeg, I use pumpkin pie spice instead. It has nutmeg in it, but not enough to offend me as I'm not a fan of nutmeg)
1 refrigerated pie crust, top and bottom (I used Pillsbury)
1 beaten egg, for egg wash

*I used 4 squash-- 3 zucchini and 1 yellow squash. Cut zucchini in half lengthwise and use spoon to scrape out the seeds. Then cut the half in half again (lengthwise) and slice into 1/4 inch segments.
**It was just one medium sized apple. I used Gala because it's what I had on hand. 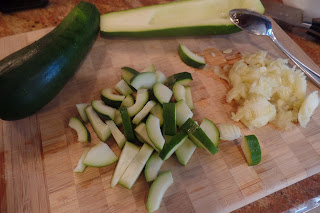 Cut lengthwise, then use spoon to scrape out seeds. (Pile of seeds, right)

1. Prepare filling. Place zucchini and apple pieces into a large bowl. Pour the lemon juice and cup of water over it and toss to coat. Allow to sit in the lemon water while you prepare the glaze, tossing occasionally. 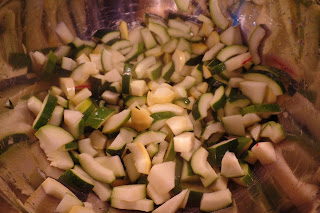 (I'll level with you. I changed that step a bit. The original recipe called for submerging and soaking the veg in water with a generous squirt of lemon juice. The idea behind it was to infuse some "apple" flavor to the zucchini and some tartness with the lemon juice. Since I usually use lemon juice in my apple pies, I decided to modify instead of ditching it altogether.)

2. Preheat the oven to 425 degrees. Line 9" pie dish with bottom dough round. Set aside. 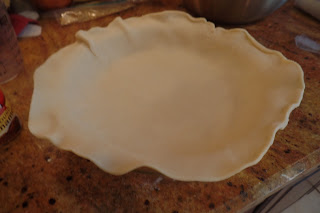 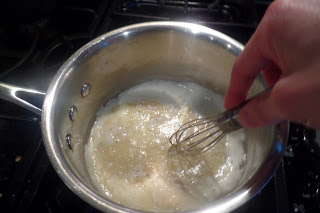 Add sugars, water, and vanilla whisking until smooth. Bring to a simmer. 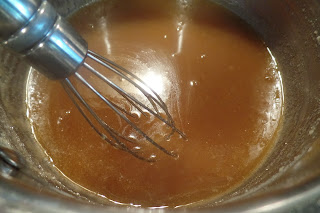 Let simmer for a few minutes, or until slightly thickened, whisking often. 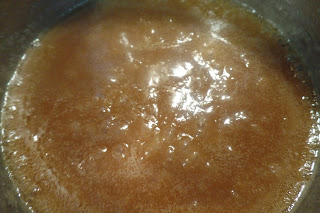 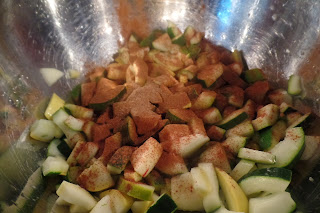 5. Pour the glaze over the zucchini and stir to coat. 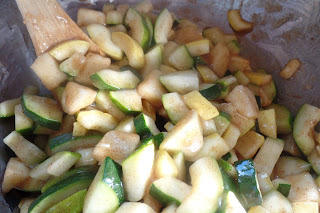 (The original recipe had you pour the zucchini into the pie shell and then pour all the glaze on top of it. I started doing it that way, but didn't like the thought that my glaze might pool in one area whilst leaving other sections dry, so I decided to coat it all before pouring it into the shell.)

6. Pour the coated zucchini into the pie shell. If it mounds, it's okay-- it'll bake down. 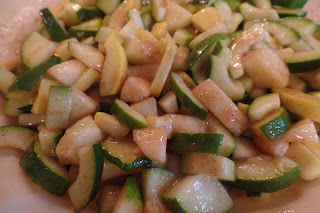 7. Trim the excess off the bottom crust, then lay top crust over top. Tuck the edges hanging over under the trimmed bottom crust and then crimp closed with your fingers. Slice a few vent holes on top. Brush with egg wash and sprinkle coarse sugar on top. 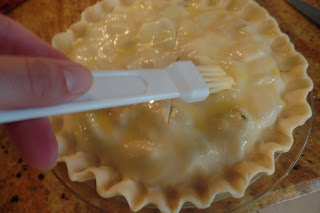 8. Bake at 425 for 20 minutes, then reduce the oven heat to 350 (without opening the oven) and bake for another 40 minutes until crust is golden brown and insides are bubbly. Cool on a wire rack. 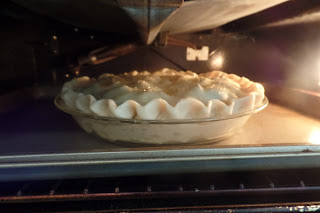 Fresh into the oven 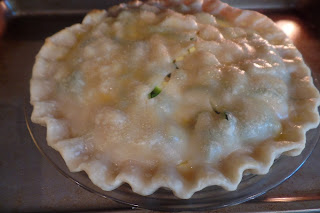 When dessert time rolled around, I brought out the pie. It looked beautiful with its golden crust and little bubbly spots where the delicious glaze had come through. But when I sliced into it and my gaze fell onto the green (and yellow) skin of the zucchini, I grew nervous. 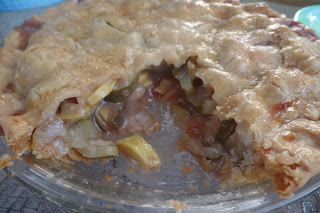 What if this pie was a disaster?? I have a pretty solid baking reputation around here, and I'm very protective of it. I didn't want some dumb veggie pie screwing it up. So before handing my guest the first piece of pie, I tried a bite. 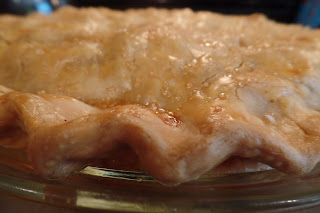 Look at that crust!

When I brought my mom a slice later, I thought she knew that when I'd told her it was "apple" pie that it wasn't *really* apple pie. She did not. She looked dubious when she caught sight of that green zucchini skin (seriously, it's the only off-putting part of the whole thing. I might peel them next time just to alleviate that shock), but tried it anyway. I watched her face as she chewed slowly. Then she said, "That's...odd." But I could tell by the way that she said it and by the way she kept chewing and loaded her fork with another bite that she didn't mean it tasted odd. I said, "Is it odd because it tastes like apple pie?" She nodded. "Yes," she chuckled, taking her slice and eating the rest of it. (And my mom isn't the kind of person who eats something she doesn't like.) My dad enjoyed his, too. I laughed, then had a wedge of my own. Completely cooled, the flavors fully married...I marveled anew. Seriously, if your eyes were closed, you wouldn't know.

It's cray-cray. In the yummiest way possible!

What will I cook up next? It might be stew, it might not be... But whatever it is, odds are it'll be delicious.
Posted by Natalie M at 2:25 PM