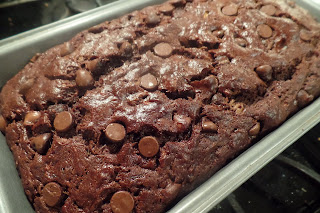 It's Sunday night as I write this. I won't post this recipe until a couple days hence, but now is when I'm writing the post and doing the baking. (As I sit here typing, the loaf is still in the oven and smells oh so delicious.)

Thankfully, my garden produced some additional squash over the weekend. I harvested 5 or 6 gourds, so I'm back in business for recipe trials. Whew.

Today I made a chicken and zucchini casserole and this bread which, like the last loaf, is more cake than bread. Such is the world of misleadingly named dessert stuffs. (Actually, I believe they get their name because they fall in the category of "quick breads" which are basically breads that don't contain yeast. Several sweet ones exist. But still, even knowing that, I find it odd calling something cakey "bread.")

I had some sad looking bananas sitting on my counter. I decided to search for a zucchini banana bread recipe. I found a few. One of them was chocolate. Then I remembered these amazingly delicious muffins I made a few times back in the spring and realized I missed them. Thus, I decided to give the chocolate zucchini banana bread a whirlio. I modified the recipe base from If You Give A Blonde A Kitchen's blog. I sort of combined some of the things I liked in the muffin recipe and techniques I used in the first zucchini loaf I featured in this series.

1/2 cup (40g) unsweetened cocoa powder (like the brownies I made recently, the original recipe called for dark chocolate cocoa. I still haven't bought any, so I used regular. Use what you have/what you like.)
1 1/4 cup (160g) all purpose flour
1/4 cup (30g) white whole wheat flour (the original recipe called for 1 1/2 cups (190g) all purpose flour; I decided to use some white whole wheat flour too because it's in those muffins I love)
1 teaspoon baking soda
1/2 teaspoon baking powder
1/4 teaspoon salt
1/2 teaspoon cinnamon
1/3 cup coconut oil, melted
3 Tablespoons vegetable oil (the original recipe called for 1/2 cup vegetable oil; again, I used some coconut oil in mine because of those muffins)
1/2 cup granulated sugar
1/2 cup light brown sugar, packed
2 large eggs
1 teaspoon vanilla extract
2 cups shredded zucchini, moisture removed (the original recipe just called for the zucchini to be "patted dry"-- I used the squeeze technique from my last loaf. I measured my 2 cups of shredded zucchini, then squeezed it dry and added to my recipe. Also, for me, this was 1 medium zucchini and 1 medium yellow squash. I removed the seeds from the yellow squash but not the zucchini.)
2 medium very ripe bananas, mashed (medium bananas are 7-8" in length)
1 cup chocolate chips (the original recipe called for Ghiradelli semi-sweet chips; however, I used 1/3 cup EACH of Hershey's milk, semi-sweet, and special dark chip varieties because YUM)
(optional) extra chips for the top

3. Trim ends off zucchini. Shred using box grater. Wrap in lint-free kitchen towel and squeeze out moisture over the sink. Set aside. 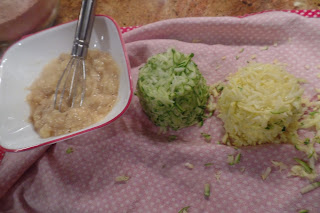 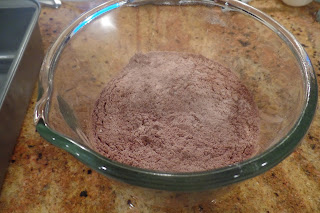 5. In a large mixing bowl, whisk oils, vanilla, and sugars. 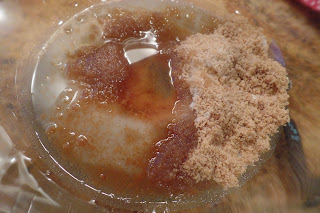 Stir in eggs, bananas, and shredded zucchini until well combined. 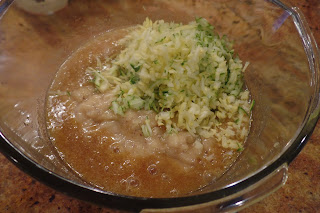 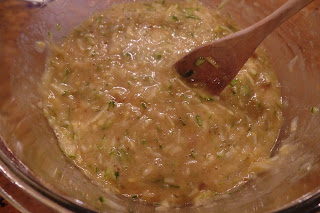 6. Fold in dry ingredients just until moistened. (Do not over mix.) 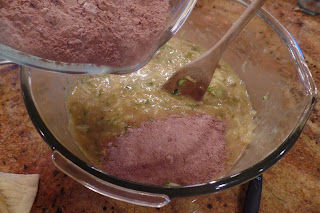 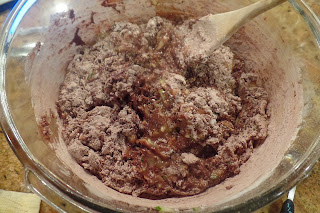 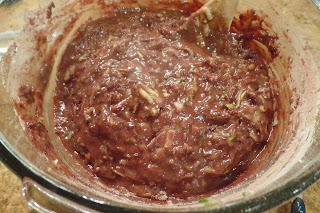 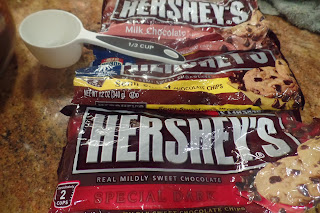 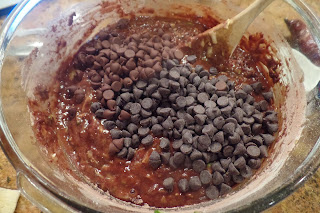 8. Pour batter into prepared loaf pan. If you accidentally "drop" a few chocolate chips along the top of the cake just so it looks pretty, now would be the time. (haha) 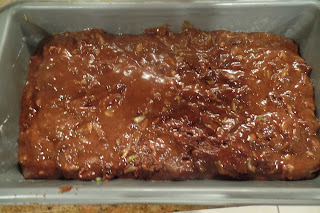 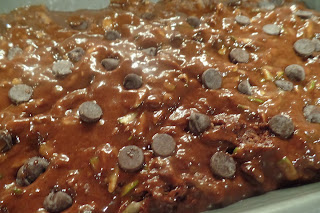 9. Bake in preheated oven for 45-60 minutes, or until a toothpick (or knife if you don't have long toothpicks) comes out clean or with only a few moist crumbs sticking to it. (Read: if you put it in and there's wet batter on the knife, it's not cooked!) (Mine took 63 minutes, though I started checking it at 45 minutes, then put it back in for 5 minute increments until the final 3.) 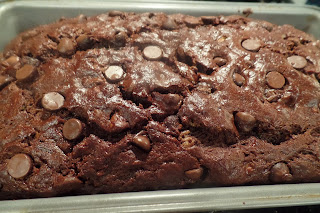 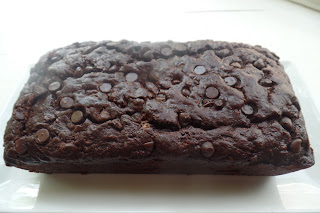 Remove from oven and let cool completely before slicing and serving. Store covered at room temperature.

Now it's Tuesday afternoon. The loaf is already half gone. My older daughter, in particular, has been scarfing it down. Of course, until she saw me updating this blog, she didn't know there's zucchini in it. Bwa hahahaha.

Anyway, it's got an intense chocolate flavor with a not-overpowering (though discernible) banana flavor. The zucchini, as before, is barely detectable. And I mean you can't taste it and you can barely see it. I think I still prefer those muffins, but this bread is solidly similar and I love that it uses up some zucchini. It's a score.

Check back tomorrow for the casserole we had for dinner before I made this bread.