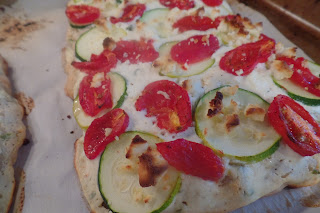 Today we harvested three of the BIGGEST zucchinis so far. One was almost as big as my youngest daughter's arm! Wowsa! (Also? I don't know how they grew so large since I was just in there two days back and took anything large enough to take. I'm pretty sure this must be what happened while I was sleeping...) I'll have to think of something really yummy to make with those bad boys.

In the meantime, yesterday I wanted something light for lunch. Luckily, the other day my fave food blogger--Sally at Sally's Baking Addiction-- posted a zucchini-based non-dessert. Score! I decided I'd have to try it. Sally's recipe includes making one's own flatbread. I've made her deep dish pizza in the past (including the homemade dough) so I know it's good, but I didn't feel like going to the trouble, so I just bought pizza dough from my supermarket and went from there. (If you want to go all out, you can find her directions and ingredients in the link I included. It should be noted that pizza dough and flatbread dough are not exactly the same thing, so be forewarned.)

1 store-bought pizza dough (I find them near the deli section of my supermarket. They're refrigerated raw pizza dough in a bag.) OR recipe for flatbread dough in link above (OR, if you're really pressed for time, cooked flat breads)
1 pint grape or cherry tomatoes, halved, seeds squeezed out (optional)
1 Tablespoon + 1 teaspoon olive oil
salt and pepper
2 cups part-skim ricotta cheese
3 Tablespoons chopped fresh basil
2 Tablespoons milk
1-2 teaspoons fresh lemon juice
2 teaspoons minced garlic (I used the jarred stuff for this recipe, but if you want to use fresh, it's about 2 cloves)
1 1/2- 2 cups sliced zucchini (about 1 small-medium zucchini, sliced in thin rounds)
2-3 ounces ricotta salata cheese (the original recipe called for 6-8 ounces goat cheese; however, I LOATHE goat cheese. Therefore, I bought myself a wedge of ricotta salata at Wegmans and it was a nice salty pairing with a different texture than the rest of the ingredients) 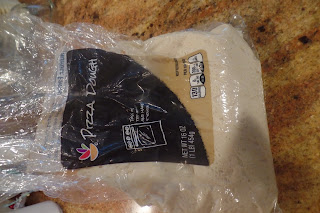 This is a side view of what the dough looks like in the bag
Directions:

1. Prepare tomatoes: Toss the halved, seeded tomatoes with 1 Tablespoon olive oil and salt and pepper. Spread onto a parchment or silicone-lined  baking sheet and bake in a 400 degree oven for about 20 minutes until blistered. Set aside. (Once cooled enough to handle, you can remove the skin from the outside of the tomatoes by pinching it off. It slides right off. This is an optional step. I did it for the same reason I took the seeds out of my tomatoes: I don't like seeds, I don't like skins. But that's totally up to you. It's not a step in the original recipe.) 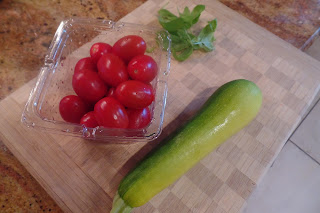 Lovely shot of fresh ingredients. Use a smaller zucchini than this one. I had too much. 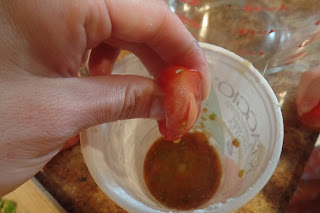 Squeezing the seeds right outta these suckers. I'm not a fan of seeds. 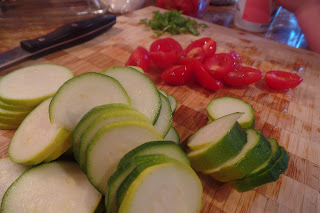 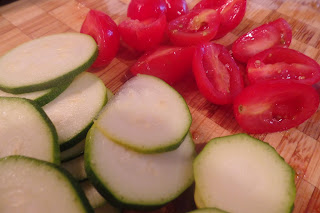 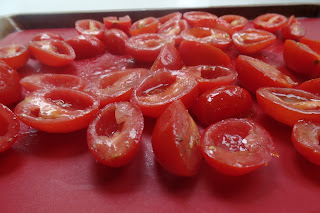 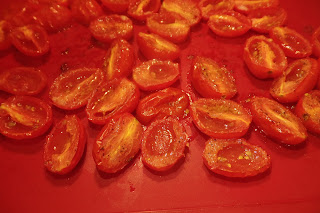 Roasted to yummy perfection. Once slightly cooled, the skins slide right off if you're so inclined to remove them.
﻿

3. Prepare ricotta: Whisk the ricotta, basil, milk, lemon juice, and garlic together in a medium bowl. Add salt and pepper to taste. Set aside. 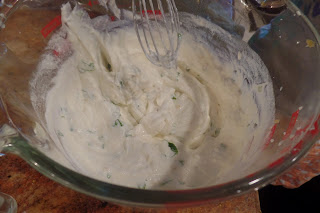 4. Prepare the dough: Divide the dough ball into two. On a lightly floured surface and with floured hands, work with one dough piece at a time. Shape and stretch the dough until it's about 1/4 inch thick. (Sally says you can use a floured rolling pin for this step if you want. However, I just used my hands. It was easier.) The dough can be any shape. **Note: if you're using a bought dough like I did, stretch it even thinner. When it bakes, it puffs up and  ends up thicker than a standard flatbread.** 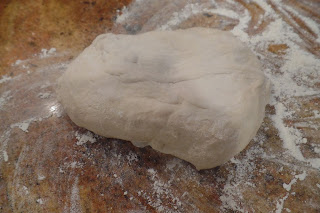 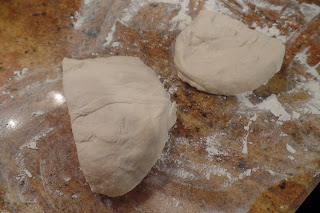 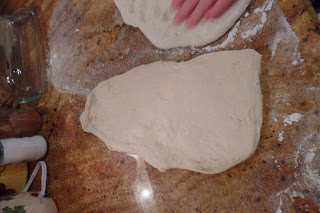 5. Place both pieces of dough on a parchment or silicone-lined baking sheet (you can also use a pizza stone). 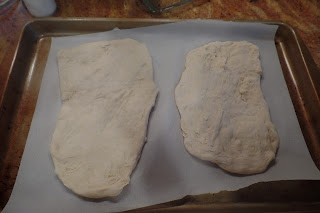 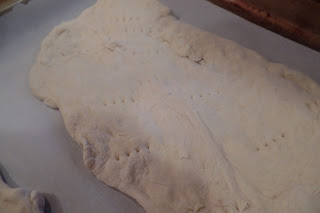 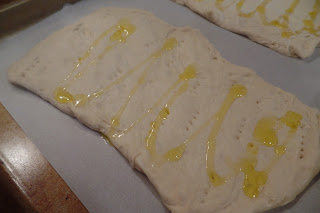 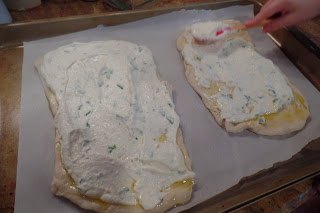 Arrange zucchini and tomatoes on each, followed by your crumbled cheese. 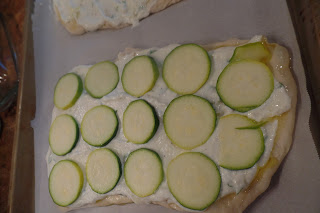 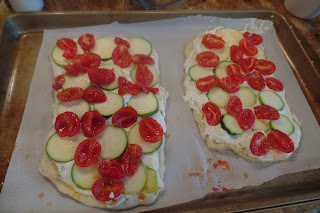 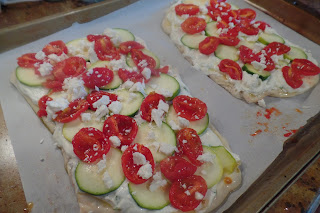 7. Bake for 15-20 minutes or until the crust is golden. Remove from oven. Slice and serve. 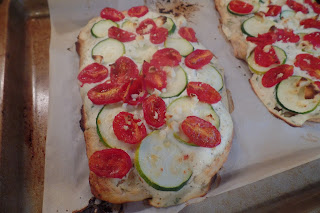 This was, indeed, a perfect option for lunch. So perfect, in fact, I enjoyed it two days in a row. It was also the perfect recipe to occupy little helper-hands. My daughters were bickering (too much togetherness) so I asked my younger daughter if she wanted to help me and of course she did. She helped me squeeze the seeds from the tomatoes, toss the tomatoes in oil, whisk the herbed cheese, and even stretch and shape and top one flatbread. She had a great time.

As I indicated in my notes above, taking the shortcut and using the pizza dough did seem to effect the outcome of the flatbread since it definitely more resembled a traditional-crust (as opposed to thin crust or thick crust, that is) pizza. If that much dough isn't your thing, then I'd suggest either making your own flatbread dough, taking the time to roll the pizza dough very thin, or just buying pre-cooked flatbread and topping it with those toppings. Easy enough changes. (I try these recipes so I can pass along my live-and-learn trade secrets to you!)

The other thing was...um...I didn't prefer the zucchini on this. For real. It just tasted too...raw and zucchini-y, and sort of overpowered the sweetness of the roasted tomatoes, creaminess of the ricotta, and saltiness of the crumbles. I picked it off my flatbread, as did both my daughters. (My husband wasn't around so he didn't get to try this recipe.) If you're very much into the straight flavor of zucchini, you'd probably enjoy it. I'm more of a love-to-eat-zucchini-without-knowing-it's-zucchini type gal (especially this far into the Summer Squash Series.) Ah well.

Still, the tomatoes and herbed cheese and the ricotta salata I put on top were all top-notch. Since I have so much of the herbed cheese leftover, I think I'll make it again without the zucchinis and on some Naan or even an English muffin, quick-lunch style.

Next time I'll share with you a fun side-dish (or appetizer or healthy-ish after-school snack option). In the meantime, I'll be scouting out the perfect uses for my ginormous zucchinis, so stay tuned!