Are Premium Ingredients Worth the Splurge? Or, The Great Chocolate Chip Cookie Taste Test 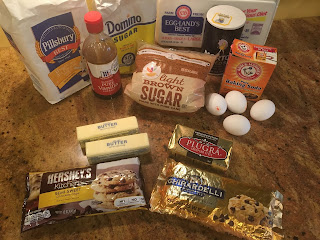 The other day one of my friends texted me to say she’d tried this new butter and it was a “game changer.” What is this butter, I asked, and why is it so great? She said it’s a European style butter called Plugra, and it’s creamier than regular butter.

(Side note: if you don't have a friend with whom you discuss butter and bake times and fun giant-cupcake-shaped pans, you really must get one!)

According to their website, Plugra butter claims it’s not only better than regular table butter, but it’s also better than other European style butters. The reason is kinda like a fairy tale classic with an unknown fourth act. It goes something like this: Once upon a time there was a girl who was big into breaking and entering. After burning her mouth on some mush, ruining some furniture, and napping, she decided to venture back to the kitchen for a sweet snack.

First she went to Papa Bear’s cookie jar and took out a treat that had been baked with those “other” European style butters. She cringed and declared, “Ugh! Too rich! This clearly has 83% butterfat and that’s too much!” Next, she helped herself to a cookie from Mama Bear’s jar, but found that equally unappealing. “Oh no! This cookie was baked with table butter which only has 80% butterfat and that is too little!” Finally, she reached into Baby Bear’s cookie jar and smiled with glee as soon as she bit into the cookie baked with Plugra. “Hot damn! This cookie has the EXACT PERFECT amount of butterfat in it. 82% is the sweet spot. Not too much, not too little, but juuuuuuust right! Thank you, Plugra butter!” And that wretch proceeded to eat every last cookie in that jar and had no regrets until later when she had a killer stomach ache because eating that many cookies is never a good call. The end.

“How much is it and where do you get it?” I asked my friend. Regular market with the other butters, $3.99 per half pound. I told her I’d keep my eyes peeled for it next time I went shopping. A few days later, she texted me a pic of Plugra on sale for $2.79 and I thought, “I need to get on this now.” I went out and bought 3. (Fun fact: I told my mom the story of this butter and she said, “But what if you don’t like it?” I said, “Mom, it’s butter. How bad could it be?” Then I said, “Oooh! Touché!” Yes, I gave myself a touché because, well, hello, I think that’s obvious.)

So now that I’d acquired this butter that claims to be the best butter, I couldn’t simply bake with it in any humdrum way. I knew I had to do something extra special with it to test the claim that it IS better. Is it worth the extra money, more than double the price of the butter I usually buy? Can one taste the difference? And, while I’m at it, I thought, I’ve been kinda curious to find out if so-called “premium” chocolate chips are actually any better than the other kinds. Why not taste two birds with one cookie, if you will?
These questions, ladies and gents, are how a star was born. And by a star, of course I mean my Great Chocolate Chip Cookie Taste Test.

Here’s what I did.

I used the same base recipe to make two batches of chocolate chip cookies. I chose the recipe my family has used forever (minus ground pecans because, while I adore the taste of them in the cookies, I wanted to keep these more “pure” for taste-testing purposes). This recipe just so happens to be the same as the one on the back of the Ghiradelli chocolate chip bag. (Another fun fact: The recipe on the Hershey chip bag is nearly identical, except it uses only half the amount of vanilla. To me, more vanilla is always better.) 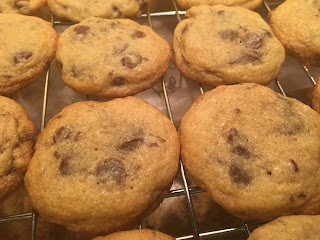 Directions (a combo of what it said on the bag and what I always do):

1.     Whisk together flour, salt, and baking soda. Set aside.
2.     In mixer fitted with paddle attachment, cream butter and sugars together on medium speed until light and fluffy (about 2-3 minutes), scraping down bowl as needed.
3.     With mixer on low, add eggs one at a time and then vanilla.
4.     Next, gradually add the flour mixture until combined.
5.     Fold in chocolate chips. (Note: Because of my experiment, I didn't fold in my chocolate chips until after I'd weighed and divided my batter. Then I used 1 cup plus 1 Tablespoon per batter batch.)
6.     Cover and refrigerate for 1 hour. (Chilling the dough helps prevent spreading.)
7.     Drop by rounded tablespoons (I use my small sized OXO scoop and scooped it to heaping which is about a tablespoon) onto a parchment or Silpat-lined cookie sheet.
8.     Bake at 375 degrees Fahrenheit for 8-10 minutes, or until lightly golden around the edges. (I left mine in for 10 minutes, but I rotated the pans at 8.) Allow to cool on the pan for 5 minutes before removing to a wire rack to cool completely.

Enter variables: In one batch, I used regular store-brand butter (in my case, Giant brand.) In the other batch, I used Plugra. Then I halved the batter for each of those batches and added “regular” chocolate chips to one half (as my “regular” I used Hershey’s Semi-Sweet chips because that’s my preferred brand and the one I use on the regular. I actually prefer it to Nestle Toll House chips, personally) and as the “premium” chips I used Ghiradelli brand semi-sweet chips.
That means my taste test features four cookies:

I measured. I portioned. I congratulated myself on my exact measurements since my regular butter dough weighed 872g and my Plugra butter dough weighed 868g (only a 4g difference? Amazeballs!) I mixed in chips. I refrigerated my batter (careful to stagger everything so that the various batches spent an equal amount of time chilling-- an hour, in this case) to keep the spreading to a minimum. (If you don't chill your dough before baking, I do recommend it.) I scooped dough (with my trusty OXO small scoop). I baked. I removed. I cooled. I labeled with numbers, so the tastings would be blind.

By and large, I didn't notice too much of a difference working with the ingredients themselves. Though I did enjoy working with the Plugra butter as it was less yellow in color and produced a slightly lighter batter (both in color and "fluff"). The Ghirardelli chips were firmer than the Hershey chips (which were softer to bite into in raw form.) Unbaked, the Hershey chips were more snackable than the Ghiradelli. Interestingly, once cooked, there was no notable textural difference between either the batters or the chips. Baking seemed to level the playing field once more.
This process took a while and I felt like a mad scientist. It was fun! (What isn't fun is that because I did this at night, the lighting in my kitchen was terrible for picture-taking. My apologies.) 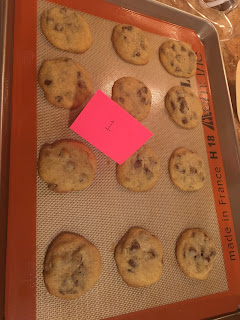 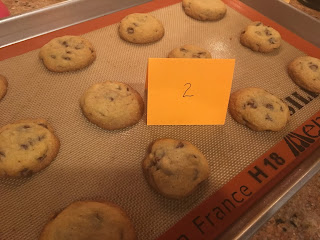 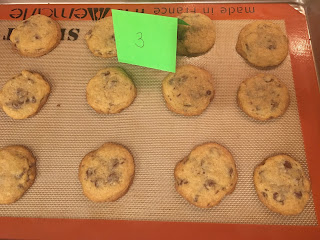 The next morning, it was time for the taste testing to begin. I made official taste testing plates, portioned into quadrants so tasters could keep their cookies straight. 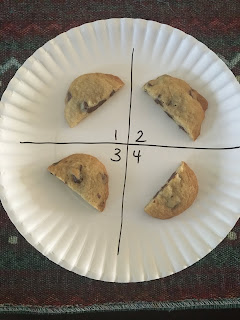 My first testers were my kids who’d been forced to smell cookies baking all night yet were denied a taste until morning. (“Too cruel any where. / Dear Duff, I prithee, contradict / thyself, / And say it is not so.”) But yes, Banquo, I DID make them wait. (Ah, how I miss teaching Macbeth.)

After these tests, I took to the streets, foisting cookies onto family members, neighbors, and people at my gym. What? Isn't that what everyone does with baked goods? 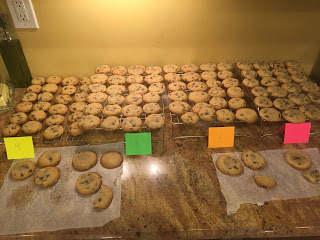 The full list of rankings (including a repeat of the ones I just noted) are as follows (I denoted near ties with a “ / ” symbol, with the first number reflecting the taster’s ultimate favorite.)

Yeah, yeah, you’re saying. I see lots of random numbers. But what does it MEAN? What were the results? Is the damned Plugra butter worth the added expense? What about the so-called premium chips?

Sadly, I can’t answer that definitively. Because, it turns out, it depends.

Before I outline those things for you fellow cookie nerds, though, I need to say this: all the cookies were delicious. The difference in the overall flavor was negligible. If you weren’t tasting them back to back specifically intending to determine a winner, you would not notice much of a difference at all among them. That was an almost universal comment—some variation of, “Uh, they all taste kinda the same.” (Except for my daughter who made much ado about hating Batch 3.) So in that regard, perhaps the short answer for those questions of the butter and the chips is no, you don’t have to splurge.

On the other hand, I still found it interesting to examine the data and search for clues, and there did seem to be some issues that arose out of this little experiment. (Any other data-lovers out there?)

For one, how much do tasters enjoy chocolate in general? For another, what’s their preferred chip-to-dough ratio? Although I used the exact same amount of chocolate chips in each batch of cookies, as anyone who has made cookies knows, sometimes a particular cookie ends up more chip-filled than another cookie. Unless I were to have hand-placed chips into each cookie, there was no getting around that discrepancy. But even if I had done so, it’s possible the taster would have preferred more or fewer chips than I placed into the cookie. Feedback I received from a few tasters noted that their rankings were due to either liking (or not liking) a sweeter cookie, and they cited the chip quantity and their effect on the cookie’s sweetness level as a determining factor.

My instinct not to complicate things by adding nuts to the cookies was a good one, but, it turns out, I should also have considered that any add-in would muddy the waters of the butter test. (I might need to try this experiment again with shortbread. Mmm.)

If we crunch the numbers and consider people’s top choices only, there’s practically a 4-way tie between individual cookies.

When we consider groupings of ingredients as outlined above and consider only people’s first choices, we again don’t see much of a spread. Things are quite close, though the premium ingredients get the edge.

However, when we consider the top two rankings for each—which I think is fair, especially as several tasters expressed near-ties for 1st/2ndplace—we get a clearer picture of preferences for ingredients, particularly on the matter of the butter (which is good since the butter is what started this journey in the first place!).

In that case, Plugra is a clear winner. The chips are another matter, it seems, though Hershey edges out Ghiradelli.

So there you have it, friends. A chocolate chip cookie showdown for the history books. Wasn’t that fun? I vote yes!

Finally, I'd be remiss if I let an entire post dealing with the matter of butter in batter to pass me by without including my favorite tongue twister, the one I recited to impress my students during our rhyme work:

Now go forth and be like Betty: buy thee premium ingredients. (Or don’t. As we kind of established, that’s really okay, too.)

**I have no affiliation or relationship with any of the brands mentioned or linked in this post. All opinions and experiences expressed herein are my own.**