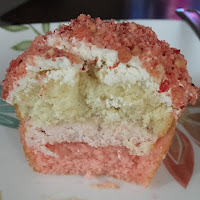 There are times when you have an idea and you try to execute it and it doesn’t work, and you’re sitting there all disheartened, like, “Crap. That should’ve been so great…”

We all know those moments.

But here’s the great thing about life: for every however-many of those situations we face, we occasionally get the opposite.

The time when not only does the thing turn out the way you’d hoped, it actually turns out even better and you’re sitting there all smug and ecstatic, and you just want to go up to everyone you meet and call all your friends and even all the people who did you wrong in life and just be like, “DID YOU SEE WHAT I DID??? It was A-MAZE-BALLS! I am queen of the universe and I can’t even with myself right now because I’m just that good!”

Yep. Those are the good ones.

And today, I’ve got one of those to share with you and I know you’re gonna love it. (Sadly, I don't have as many photos to share as I usually do; when I made these I wasn't planning  to share them. But they turned out so well and I do have *some* pictures, so I hope you get the idea.)

My younger daughter turned 7 around Easter. Therefore, my extended family had a combo birthday-Easter meal. I volunteered to handle dessert because, well, desserts are my thing. Obvi.

There’s some big chocolate lovers in my family. But I personally love fruity desserts, so I wanted to offer a non-chocolate option as well. What resulted were two of the most amazing desserts I’ve ever produced, and I’m going to share them both with you. (One now; one in the next few days.)

I’m starting with my favorite, though, which are strawberry shortcake-like cupcakes based on those Good Humour ice cream bars I used to enjoy as a kid (I got them at lunch in grade school. Ah memories...) Since my birthday girl had recently tried one at her own school and raved about it, I was inspired.

I searched the internet to see what was already out there. Lots of layer cake options, it turns out. Including this gorgeous one from Confessions of a Cookbook Queen. I didn’t feel like making a layer cake, though, because I was already planning to do the giant chocolatey layer cake option.

No. What I really wanted was something small and grab-and-go. Like a cupcake. But could I do a layered cupcake? Then there was the question of striking the right vanilla and strawberry balance. What if I used two types of buttercream and two flavors of cake instead of one, and I alternated them for effect? Then I’d put the strawberry shortcake crumble on top for a texture and flavor boost. Yeah, that sounded amazing. I wanted to try it. So I did.

With that, a star was born.

If we are getting specific, they are strawberry and vanilla layered cupcakes filled with strawberry buttercream, and topped with vanilla buttercream and strawberry shortbread crumbles.

But we can call them strawberry shortcake cupcakes for short. *The ultimate.

Now, full-disclosure, these cupcakes are a lot of steps and take a while to execute. But the recipe also makes a lot of cupcakes (I got 40 full layered cupcakes and an extra 3 I served as plain cupcakes.) So if you are going for a show-stopper cupcake, these are it. And the taste and wow factor more than make up for the effort.

I'll start by outlining the process for you, then I'll post the recipes below it.

***
HOW TO MAKE THE ULTIMATE
STRAWBERRY SHORTCAKE CUPCAKES

I made two boxes of cupcakes— one each of vanilla and strawberry--so I could layer them later. Each finished cupcake will be half vanilla and half strawberry (see photo at top of post). I followed the package directions to prepare and bake the batter. Note: I DID NOT use cupcake liners. Instead, I generously greased each cupcake well with Crisco so the cupcakes wouldn’t stick. After they baked, I let them cool for 10 minutes in the pans and then transferred them to a cooling rack to finish cooling.

*Note: The boxes of vanilla & strawberry cupcake mix I used were about an ounce different in weight which made for an uneven cupcake yield. I had 2 or 3 fewer strawberry cupcakes than vanilla. I used the odd ones as “samples" for me and my family.

Once the cupcakes had COMPLETELY COOLED, I used a serrated knife to cut each cupcake in half horizontally, mostly making my cut as though separating the domed “muffin top” section from the straight bottom (like removing a mushroom cap from the stem). I lined a tray with the bottoms (and left the tops on the cooling racks) and set them all aside until I was ready to use them.

I actually did mine the night before because I knew I had a lot to do on baking day, but you don't have to. Prepping this stuff while the cupcakes bake would be a good use of your time. The crumble comes together quickly with the help of a food processor.

*Note: If you do yours ahead and need to store it overnight, or you want to store your inevitable leftovers (the recipe makes more than you'll need but it's delightful as an ice cream or yogurt topping so I say YAY) I’d recommend not storing them in plastic. I find that the plastic smell can get into the topping and that’s gross. I stored mine in a shortbread cookie tin, but glass would also work nicely.

When it's time to use it, pour about a cup at a time into a bowl with low sides. The reason I recommend not just starting with it all at once is because if there's leftovers, there's no danger of frosting bits getting into your crumble topping.

Once I made it (using my stand mixer), I scooped it into a piping bag and used only a plain coupler as my "tip" since I wasn't going for any design. I piped about 1-1.5 Tablespoons of frosting on the bottom portions of all the cupcakes. Half of your bottoms will be strawberry cake and half will be vanilla, but regardless of the cake flavor, the strawberry buttercream will serve as the middle sandwich layer of frosting.

*Note: It probably would have been just as efficient to use a medium OXO scoop (which is about 1.5 Tablespoons of frosting) for this task and then give it a quick spread. Either way is fine. Since this was my trial run, I opted for a piping bag because I thought it would be faster.
Step 5: Prepare vanilla buttercream

Again I used my stand mixer to make the frosting. When it was time to use it, I didn’t bother scooping it in a piping bag because I needed to spread it on the cupcake tops.

I scooped 1 small OXO scoop of frosting (which is about 3/4 T) on top of each cupcake top. I did all my scooping first. Please remember that half of your cupcakes will be vanilla cake and the rest will be strawberry, but regardless, the vanilla frosting will go on the top of the cupcake. After portioning out the frosting dollops, I went back and spread out the icing, working one cupcake at a time. After spreading, I dipped each one gently, icing side down, into the crumb coating. I worked one at a time because I didn’t want my buttercream to set at all before dipping. 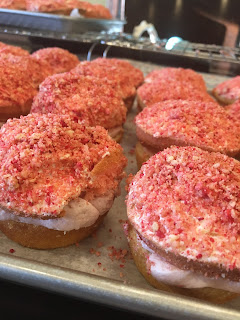 If you're eating them the same day or the next day, they should be ok at room temperature.  (I've never had an issue.) But because of the buttercream, you should aim to keep them refrigerated if they will be out for any longer than that. If you don't prefer eating them cold, you can always take them out of the fridge 30-60 minutes prior to serving so they can come to room temperature.

Directions: Prepare cupcakes according to package directions. Allow to cool 10 minutes in pan before removing to cooling rack to completely cool prior to cutting and icing.

Directions:
(If too thin, wet, or curdled-looking due to the addition of the preserves, add more sugar. If too sweet, add more salt. However, I found mine perfect as listed.) 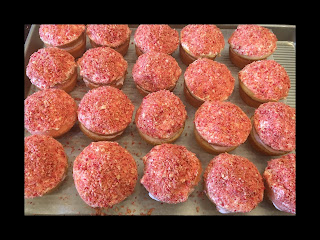 Like I said, these are real show-stoppers and they taste SO amazingly divine you won't believe it. Everyone who tried one raved about them. And that was a lot of people because I shared them around. Besides my family, I brought some to the gym for the staff and I sent some with my husband to a meeting. (One individual has mentioned them to me almost every time he's seen me since he ate one!)

I LOVE LOVE LOVE these cupcakes and I know you will too. If you make them, you'll end up celebrating yourself for sure!