Luck of the Modern Parent 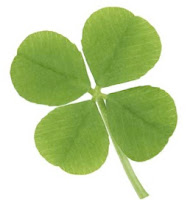 Photo credit: here
When I was a kid, here's what we did at home to celebrate St. Patrick's Day: my mom made some Irish potatoes candies (1) and decorated a couple windows and doors with paper shamrocks. (That's also what we did for Valentine's Day, only with some hearts and cupids, and Thanksgiving with the turkeys and pilgrims, and Halloween with black cats and witches and skeletons. You get the picture.) And that level of acknowledgement and "celebration" was pretty standard. It was uncommon to do much else. Except for my best friend's mom who always made her and her siblings shamrock shakes as an after-school snack.

You know what we did in school to celebrate St. Patrick's Day? Nothing. Seriously. Not a thing. They barely even advertised for us to wear green! Even when they did, I was one of a very few who wore it.

I had ONE shirt--a ribbed green turtleneck--and a ribbon with shamrocks on it which I tied around a ponytail (or, if my hair was too short that year, on my belt loop or around my neck). If I felt extra festive, I'd throw on my "Kiss Me, I'm Irish" pin to complete the look. I wore that same outfit EVERY. SINGLE. YEAR. For real. I'd estimate I got that shirt around 6th grade and only finally retired it about 5 years ago. (2) (Yes, it still fit--except the sleeves which, admittedly, went from full-length to an inch shy of 3/4-length. But hey! That came into fashion so LUCKY ME!) Miraculously, the vibrant Kelly green hue never faded in all the years I owned it. Probably because I only wore it once a year.

Anyway. The point I'm getting at is this: St. Patrick's Day? As a "holiday?" Non-entity.

But I learned a few years ago, when my older daughter started kindergarten, this is no longer the case.

No, now there's a whole *thing* with St. Patrick's Day. Involving, of course, the leprechaun. Who, apparently, comes to the school and gets into all sorts of mischief, wreaking havoc in the classrooms. I'm talking overturning chairs. Messing up blinds. Tossing papers around. Breaking things. Mixing up pencils and markers. Etc etc etc. Oh, but sometimes he leaves behind gold coin candies.

Can we pause for one minute here? What nutty newbie teacher thought up this nonsense? As though teachers don't have enough shit to do during a normal day, enough REAL messes to clean up, now they're expected to destroy their own classrooms and waste instructional time while the kids then have to clean it all up??? WHY??? It's SO. DUMB.

But, see, if that was all there is to the new wave, maybe it wouldn't be such a big deal because if some whimsical teacher wants to wreck her own room, I guess that's her business. It doesn't affect my life or infringe on my time.

Unfortunately, it's not all. Because then the forms come home about making something called a "leprechaun trap." The first time I saw it, I was like, "What the hell is this?" Why would anyone want to trap a leprechaun? Aren't they busy at the end of the rainbow with pots of gold? But it goes along with the whole mischievous-leprechaun concept. (3)

So on the appointed day, I cart my kid AND her trap to school, all the while curious as to how the teacher is going to work around the idea that, presumably, there is one leprechaun but thirty traps. Will the "best" trap catch him? Ooh, kindergarten intrigue.

Guess what? Turns out the whole leprechaun trap concept puts the SHAM in shamrock!

THE LEPRECHAUN IS NEVER CAUGHT. What kind of blarney is that? But then, of course that's the outcome because  how can you catch something that DOESN'T EXIST?

What we're left with at the end of the day, then, is a whole bunch of wasted time (either the kids' or their parents' - see footnote 3 below), disappointed kids, and a mess that didn't need to happen in the first place.

And, again, if that's all there was to it, I could just suck it up once a year. But my kids think this is normal and they expect it at home, too. Because why does the leprechaun visit their friends' houses and not their house?

So then I'm in the unenviable position of making a choice. Do I open Pandora's box and tell them the leprechaun is fictional, and risk bursting the magic bubble of other made-up characters? If one falls, will they all fall? (It's an inevitable eventuality, but is now the time?) Or do I cave to the new trend and buy a $5 tub of gold coin candies, knock some pillows off the couch, tie up my curtains, and dribble a few drops of green food coloring into their morning milk?

Some people might argue this is exactly why they don't perpetuate the belief in any character. And in one way, that might be easier. Though in others, I bet it's harder. After all, when so many other people get to believe in something, it can feel lonely or sad not to. Especially as a kid. I've read articles written by parents who claim their kid doesn't miss out and still gets presents or candy in conjunction with the holidays. But I'd argue that the kids are missing out on some degree of the intangible "magic" of believing simply because it's fun to believe. Even if, down the line, they'll be disappointed to find out it wasn't literal truth, but more a figurative ideal, at least they were able to revel in the magic of it for a time.

On the other hand, it can be difficult and stressful to keep myths alive for kids. Fielding questions about inconsistent-looking bearded men in red or bunnies. Explaining disparities in rewards for teeth. Responding to kids' notes left in the dead of night. Mastering the perfect timing for magically appearing (or disappearing) items throughout the house.

Back in the day, parents signed on for this just a couple times a year-- Christmas and Easter-- and maybe around tooth-loss time.

But Christmas is no longer one night of magic. It's a whole month because of the likes of Elf on the Shelf. (Which we don't do, much to the disappointment of my daughter.) (4)

Wearing green on St. Patrick's Day is no longer enough. Now there's a trap and a mess and hard-to-find gold candies.

Aside from the extra work involved, the additions stress me out because I don't like to over-complicate things. The more intricacies involved in a story, the harder it is to keep track of them, stay consistent, have them make sense. Plus, it's uncomfortable because I'm forced as a parent to make new judgment calls about what constitutes a "healthy" fantasy life versus where it crosses the line into a lie. Is it okay to perpetuate some characters without doing all characters? Or, as some argue, is any one of these a recipe for ruined trust down the line?

I don't have the answer. I only have what I suspect might be the answer for me and my kids at this point in time. (5) I may not know until they're older if I got it right.

(1) I've recently learned Irish potato candies, like scrapple, are a regional thing. A Philadelphia candy, as it were. So if you don't know what I'm talking about when I refer to them, it's a little ball of coconut cream rolled in cinnamon. It's roundish and brown like a potato, hence the name. But there's no potato in them. I decided this year I wanted to make my own--sooooo easy-- and I had a tough time finding a recipe without cream cheese in them since the ones I grew up eating had no cheese in them. Here's the recipe I found that is spot on if you want to taste the deliciousness. Oh, except you roll them ONLY in cinnamon.

(2) When I bought a new green shirt--a short-sleeved scoop neck--to wear only once a year.

(3) If you're not familiar with the concept, google it. At its base, the task is simple. As in simplynotsimple. The mission: construct a trap to catch the leprechaun doing all the mischief in the classroom. Use boxes, paper, pots (gold optional), rainbows, makeshift ladders, paper-towel-roll slides, pencils, whatever, to jerry-rig a trapdoor or other means of capturing the dude.

I know what some of you are thinking: But there *is* educational value to this project. It's not just fluff. There's opportunities for artistic creativity and problem-solving. Lessons on cause and effect, even some possible physics depending on the construction.

And, for the ten kids who completed their own projects, I'll agree with you. But for the 20 other kids whose parents CLEARLY did theirs, they got nothing from it except their first lesson in helicopter parenting.

For the record, my daughter did her own, constructing what looked to be more of a leprechaun house than anything else. She used a box and taped a bunch of toy furniture and pictures and so forth to the inside. Her rationale? It would be so cozy in there, the leprechaun would choose to stay. This is the same girl who, at Thanksgiving, completed the sentence "If I was a turkey at Thanksgiving, I would..." with "dress up like a pig." Can't argue with that! I love the way she thinks.


(4) Last year, we got sort of roped in to doing a version of this from Dec 1-24 because my daughters were gifted with what were described as magical elves who moved in the night. But we didn't continue the tradition this year. Now the elves are more decorative for the girls' bedrooms. I still had to make up a story explaining why they weren't moving, however.

(5) Which is why I got up fifteen minutes before my girls today and half-assedly "messed up" and dyed their milk green and left them each a few chocolate coins.
Posted by Natalie M at 12:31 PM