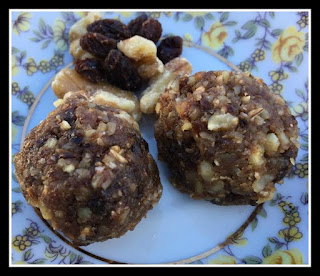 Two days ago, there was a death in my kitchen. Don't be alarmed--no living souls left us, thankfully. But still, I lost an old, trusty friend. A pal I turned to when I was loath to get out my cumbersome food processor, when I needed to make a small batch of ground pecans or my family's favorite salmon mustard sauce. The buddy who has celebrated as many anniversaries with me as my own husband. Two days ago, my Black and Decker Smart Chopper was damaged beyond repair. (I contemplated including a picture, but open-casket funerals creep me out. I prefer to remember him as he was.)

RIP Smart Chopper - Photo from Amazon.com
Yes, of course I'm being a bit melodramatic here. It's *only* a kitchen tool. But as anyone who does a lot of cooking could tell you, certain kitchen gadgets are more oft-used than others. Certain gadgets, if lost, create a bigger hole than others. (Not the donut pan, though. Those holes aren't all that large to begin with, especially if you fill the pan too high. Ba dum bump.) But, seriously, if, say, my quesadilla maker suddenly broke down, that's no big loss. It's easier to make quesadillas in a skillet, or even in the oven. (Ok, full disclosure: I haven't owned a quesadilla maker for over five years now. I used it twice in the six years I owned it and it was taking up valuable storage space. I made a great show of getting rid of it, bragging to my husband about the progress I was showing in purging lesser-used gadgetry, even as I bought a new gadget to replace it. Nevertheless, if I still owned the quesadilla maker and it suddenly broke down, it would be no big loss. That's the point I'm making.)

But that wasn't the case with my Smart Chopper. It was one of the first kitchen gadgets I ever bought, in fact. I acquired it shortly after moving in with my husband, thinking it would be a good substitute for a food processor. It wasn't. Its 1.5 cup capacity was much too small for major processing jobs. But for small things--chopping up a few cloves of garlic, mincing the veggies I sneak into our meatloaf*--it's so convenient. I'd had it over a decade.

Last Christmas, I tried turning some candy cane sticks into candy cane dust for the tops of my beautiful peppermint cake pops (if you click that link, they're near the bottom of the post). However, turns out those candy canes sticks weren't just any old sticks. They were INDUSTRIAL-STRENGTH ROCK-HARD SUPER-MEGA-MIGHTY candy cane sticks, and they were having none of the pulverizing. They jammed the motor, rendering my poor Smart Chopper momentarily stupid. The plastic casing of the blade drop-in piece broke. I thought Smarty McChopperson had chopped his last. But, like Gladiator, he still fought valiantly while injured and prevailed. For over a year, in fact.

And he'd still be fighting, if only...

Picture it: my kitchen, two nights ago. (No. Not Sicily, 1922.) I'm making a recipe from Sally's Baking Addiction (my baking addiction is making all her recipes, it would seem) in the Smart Chopper. It was a healthy chocolate energy bites recipe, using dates, nuts, seeds, vanilla extract, and cocoa powder. I added a touch of honey to mine also, in case you care. In any event, I'd just finished forming the balls and decided a little peanut butter flavor would take them up a notch. So I rolled them in some PB2 powder. Brilliant! Then I put them in the refrigerator. When I opened my cabinet to replace the PB2, all hell broke loose. The PB2 bumped the tahini which upset the Nutella which knocked the cookie butter out of the closet. A Giant-brand bomb landed on my Chopper, sending shards of plastic shrapnel flying hither and thither. "Noooooooooooooooooooooooooooooooo!" I watched in horror, but there was nothing I could do to save it.

You read that right. What finally did in my Chopper was a damned off-brand jar of speculoos!

What was I to do, then? (This is a rhetorical question. The answer, it should be obvious, is that I needed to immediately replace it.) I took to Amazon and saw that I could get the latest model for about $12 OR I could get a 3-cup capacity version for around $20. Since there have been times when I could could've used some extra space in my mini chopper, I opted to size up.

My new friend arrived today. Black and Decker Ergo Chopper. I'll just call him Ergo for short. (That's a lie. I'll probably just call him my mini-chopper. I may be eccentric about kitchen gadgets, but I don't actually name them real names.) 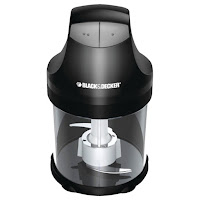 Black and Decker Ergo Chopper- Photo from Amazon.com
To celebrate its arrival, I decided to make my own version of an energy bite, but I wanted mine not to involve chocolate. I brainstormed as I drifted off to sleep. How could I tweak the base recipe? Well, instead of the sticky dates, maybe I could use raisins. And instead of the peanuts, I could use walnuts. Instead of the seeds, I could use oats. I kept the vanilla, added a touch of salt and some cinnamon to round out the flavor, and a teaspoon of honey for both a little more moisture and a smidge more sweetness and boom. A star was born. They're convenient to grab after a workout or if you crave a little sweetness, without refined sugar. (Although, let's be honest: refined sugar tastes amazing.) 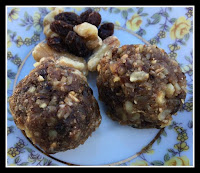 Let's end this post with a moment of silence. Maybe you'll spend that moment mourning your own favorite kitchen gadget, or maybe it's out of respect for mine. But, if you're really wise, you'll spend it chewing.

* Veggies inside meatloaf is surprisingly good. I use carrot and lots of fresh parsley. I also use oatmeal instead of bread. Mmm, and healthy! I looked for a link to the recipe online but I couldn't find it. It's from the Most Decadent Diet Ever cookbook which I bought back in 2008; it's one of the few things I've ever made in the book but it's our go-to meatloaf recipe. You can find the recipe on page 128.
Posted by Natalie M at 4:37 PM