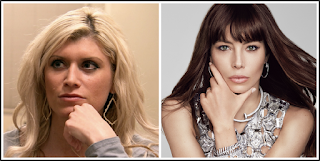 Episode 7: Wherein Amber has a conniption over not looking enough like Jessica Biel


The married couples are waking up for the first time together in the homes they share. What they choose to do with that is up to them, Rev. Cal notes ominously. Like, uh, thanks, Cal.

Mia and Tristan are dropping the “L” bomb on each other left and right, but Tristan qualifies to camera that while they’re saying “I love you,” he’s not IN love with Mia. Methinks Mia Stalkerino doesn’t realize there’s a differentiation.

Amber and Dave are having an awkward on-camera breakfast during which they’re rehashing an argument they had the previous night off-camera. A good-natured game of “who’s your celebrity crush?” turned into a thing when Dave revealed his is Jessica Biel and Amber got upset because she looks nothing like Jessica Biel. She explains that she has some insecurities because she’s attracted to him and is worried he’s not as attracted to her. Though Dave indicates that he’s very sexually attracted to her. (Personally, the hair color is something one could get over, but the insecurity, to me, is off-putting.) Dr. Pepper explains to camera that the experiment is set up to put commitment at the front so that these little things like small physical matters that might typically derail a budding relationship won’t be as apt to do so.

Danielle and Bobby have dogs. Bobby has crazy bed head. They’re boring so the camera goes back to Amber and Dave and their strife.

Dr. Pepper has to be called in to help Amber deal with her insecurity. Dr. P is basically like, “Girl, aren’t you two doing it a lot?” and Amber is all, “Yeah…I feel desired, but…” and Dr. P is like, “There’s more about you that matches Dave’s wish-list than the hair that doesn’t, so believe him if he says he’s into you, ‘k?” K.

Now that *that* trouble is solved, the 3 couples are meeting up for dinner. The ones who actually had a honeymoon arrive first and wonder if Tristan and Mia will show up for this date. They are curious how T&M will act and if they’ll address the arrest situation. Previously, Tristan and Mia told two conflicting stories about what went down to interrupt the honeymoon.

The duo arrives and acts like everything is cool and normal. They oversell their “staycation” in Dallas. Everyone seems uncomfortable by, as Bobby refers to it, “the elephant in the room.” As Tristan and Mia attempt to share a meatball, Dave says what’s on everyone’s mind by broaching the subject of what happened at the airport. Um, wow. That’s bold. Because if you think about it, that’s kind of NONE OF THEIR DAMNED BUSINESS in the scheme of things. Mia and Tristan hedge big-time and fake-laugh it off, and nobody seems at all satisfied with it but they have to move on because to continue to pry would just be beyond.

The meal proceeds as the couples cover all sorts of topics: name changes? (Mia and Danielle took their hubs’ names, but Amber didn’t. Dave tells camera he doesn’t mind. It’s a big decision and they can always do it later if she wants.) Cooking? (Danielle doesn’t. Mia “crockpots.”) There’s a brief break where the couples congregate in like-gendered groupings. While the ladies gush over wedding rings, the men discuss the L-word. Tristan overshares how he and Mia say they love each other but he’s not yet in love and it comes to trust and he’s not there yet. Mia overhears him and seems rather put out that he’s telling their personal beeswax. Then the marrieds return to their seats and Tristan hits the group with, “So, do you guys do sex?” I guess turnaround is fair play and all that.

Danielle and Bobby won’t answer that question—they want to have that aspect stay private as a couple (which I support. Even though the rest of America knows their business.) Amber haltingly admits she and Dave do it, but refuses to share additional info when Tristan pries further and wants to know if it’s good. (Yeah, he’s def getting them back for their own nosiness!) Tristan then reports that he and Mia do sex, and do it often. Someone else at the table was like, “Good for you…” but in the tone one uses when they’re actually saying, “Gross. Wish I didn’t know that.” Danielle and Bobby admit the dogs sleep with them and they get sympathetic faces, but it sort of seems to move the discussion along. Or maybe that was just the editing.

Anyway, there’s a forced group hug at the end and Tristan states that they’re family. If they are, then he’s Creepy Uncle Tristan.

Ominous music is playing after the hug as the scene changes and it’s morning in a high-rise.

Oh, apparently Mia and Jay-T got into a tiff last night because Mia was upset T told Dave about the trust issue. T confesses there’s a cloud over their marriage because of the trust needing to be rebuilt. Boring conversation ensues and they resolve to stick with it and get through it.

Now it’s time for the couples to hang out with family and friends!

Bobby and Danielle have dinner with his family. Bobby’s dad points out that Bobby’s freezer isn’t as moldy as before (but are there still WHOLE FROZEN DUCKS in there, I wonder???) Bobby’s sister asks what Bobby’s fave activity was on the honeymoon. He answers like so: “My favorite…activity… on the honeymoon…was…” and then everyone laughs at his lame sex joke. Bobby’s mom wants to know how Danielle’s commute has been. (Not too bad. But it’s 90 minutes!!!) I want to know how long I have to watch this boring footage before they move to someone else’s trainwreck.

Amber and Dave time! Amber’s best friend, Zachia, and spouse, Jason, come over. Zachia—who dictates what Jason can drink and tells him he’s hit the jackpot being married to her-- is a bit much for Dave. Too bad for Dave that Zachia isn’t going anywhere. She tells camera that she and Amber are in it forever.

Mia and Tristan are forming a game-plan for dealing with “the situation” with regard to Tristan’s mom. He thinks Mia should talk to his mom directly and explain what happened. Mia says she can’t wait. But that’s obviously bullshit. The thing is, I’m not sure how I feel about this. I’m not really down with that. I don’t know that I feel like Mia owes Tristan’s mom an explanation. She’s not married to her mother-in-law. This seems like marital business to me. But Tristan obviously wants to share this part, so after saying how special and worth fighting for Mia is, he breezily and without mincing words informs his mom that Mia lied to him. Mia tries to explain it away saying she was in a heightened sense of paranoia as it was her first run-in with the law. Tristan’s mom tells Mia she was (maybe still is?) a prison guard and Mia should be scared because Momma knows what they do to the “pretty ones.” Oh shit! Then Momma wants to know if Mia has told T everything that will affect HIM. Mia says yeah. Momma says let’s let sleeping dogs lie. (Poor choice of words.) Everyone is comfortable now. Ho hum.

Back to Dave and Amber. Dave’s cooking “turkey mess” for dinner and wants to talk about Zachia and Jason. He admits he was taken aback by Zachia’s ball-busting ways. He adds that it’s not something he’d be cool with for himself in his relationship (aka- don’t treat me like that, Amber!) but if it works for Jason and Zachia, he guesses that’s fine.

Dave suggests hanging out with his friends next. Amber is nervous and hopes they like her, and worries she might be shy when she first meets them. Dave tries to reassure her that all of his buddies’ wives are awesome people, and Amber says that it sounds great being involved with the wives. But then adds that she has her own friends already so doesn’t feel like she needs other friends. More ominous music plays (this is getting to be a real *thing* this ep, isn't it?) as Dave looks down and they go to commercial. When they return, Dave is upset that she’d say that. He wants her to meet his friends and be friendly with them, too. Amber points out it’s harder combining lives the older one is.

Weird PET ACCIDENT INTERLUDE. Dogs are peeing all over at Bobby and Danielle’s pad. Bobby is annoyed as he cleans it up. Dave cusses at Paisley the Cat who shredded toilet paper. Dave is leaving that for Amber to clean.

Now Amber and Dave are BBQing with Dave’s friends. He hopes it goes well because he wants to do this a lot. The ice is broken right away when one of the friend’s kids says she has a cat. Amber shows a pic of mischievous Paisley and everyone seems happy.

Dave goes outside to talk to his friend, Kelly. Hot damn! Mystery solved! Kelly (of Kelly and Dabney, ep 2) is the dude! Amber is inside talking to the women and overshares her insecurities about the stupid blond hair business AGAIN while the women nod along, obviously uncomfortable. Dr. Jessica pops on screen to confirm to viewers what we’re all thinking: yeah, Amber’s insecurities tend to get the best of her and if she doesn’t learn to get them in check and stop second-guessing Dave’s attention, it may cause issues down the road. I’ll say. Back from break, Dabney (the lady) and Crystal reassure her. Crystal shares an anecdote about how her husband’s celebrity crush is Halle Berry, and she looks absolutely nothing at all like her. Then she says to Amber “so at least *your* hair is naturally brunette, right?” BURN on Amber’s dark-ass roots! LOLOLOLOLOLOL.

Back with Mia and Tristan…zzz. Tristan wants to move to Houston to work his business and his family is there. Mia feels overwhelmed. She’s not sold on a move yet and loves Dallas. He says there’s no rush to decide (but I suspect there is.)

Danielle admits she usually looks for things she doesn’t like about guys she dates, but she loves everything about Bobby so far. Bobby gets giddy every time Danielle says nice things about him. They are growing emotionally together every single day. They kiss goodnight. Yes. Sleep seems like a great idea right about now.

Next week, Amber is going to be insecure some more, and Tristan is going to discover Mia lied about something else. I’ll be sure to spend my days between now and then practicing my shocked face.

* Photo credit for the pictures at the top - Amber's pic was from usweekly's site; Jessica's pic was from google's grab off of celebrity pet worth's site