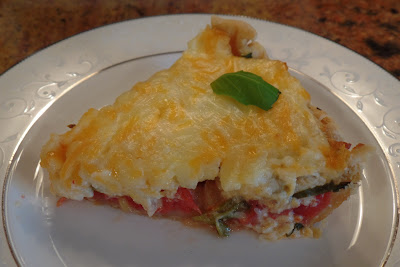 There's nothing like a fresh, homegrown tomato. From the smell to the juicy sweetness, it's in a league of its own. And it screams SUMMER.

As it turns out, besides the squash you know is filling our garden this summer, the tomato harvest has begun. We have so many tomatoes it's hard to use them all. I've been putting them into salads, adding them to sandwiches, even eating them plain (with a little sprinkle of salt and pepper--mmm). We've been giving them away, too. But there's still a ton.

I remembered I'd pinned a recipe for tomato pie a while back, and I decided it was the perfect thing to try with these tomatoes. Today was the day.

My daughter had some friends over to swim. A sort of end-of-summer hurrah before school starts. This tomato pie was my treat to myself as I sat on the back deck watching them play on the animal-shaped floats and splash around.

As such, I hadn't intended on posting the recipe or snapping any pictures. But after my husband tried a slice for himself, he told me I needed to share it. And this is coming from a guy who is just so-so about tomatoes in a general sense. He likes tomato sauce as much as the next person, but he's not big into tomatoes plain or as the star of the show. The fact that he enjoyed this recipe as much as he did speaks volumes to the flavors. Thus, I got out my camera and did the best after-the-fact photo shoot I could manage.

Because we are trying to eat healthy, I made a few modifications to the base recipe by Lauren Allen over at Tastes Better From Scratch blog. Mostly, I cut back some of the cheese amounts. In the recipe  below, I'll include the quantities I used. However, next time (and there WILL be a next time), I will cut even more since there was still a lot of cheesy topping and it would have been just as delicious (and lower in fat) with less. I'll include those amounts, too. 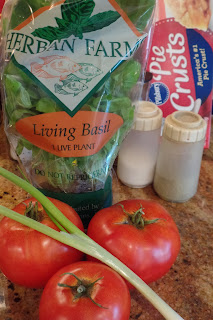 Directions:
1.  Follow package directions and pre-bake your single pie crust. (My crust said to preheat the oven to 450 degrees and bake the single pie crust--pricked with a fork--for 10-12 minutes.) Allow to cool slightly.

2. Lower your oven temperature to 350 degrees F.
3. Slice, peel, and de-seed your tomatoes. Place the tomatoes in a colander in the sink in a single layer. Sprinkle with salt and allow to drain for 10 minutes.
4. Meanwhile, make cheese mixture by combining mayo, yogurt, and cheeses in a medium bowl. Stir and set aside.

5. Use a paper towel or lint-free kitchen towel to gently pat dry (squeeze if necessary--but don't smoosh your tomato) any additional juice from the tomatoes. Wet/juicy tomatoes will make your pie soggy when it cooks.
6. Place tomato slices, basil, and green onion in the pie shell. Sprinkle with salt and pepper.
7. Spread cheese mixture on top of tomatoes.

I enjoyed my slice with a side salad and found it a satisfying brunch option. My husband remarked that it would also make a nice appetizer if one were hosting a party (in which case, I might slice into 16 slices instead.) 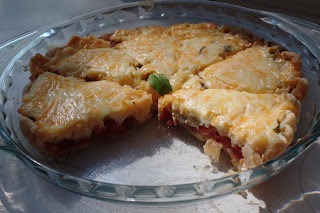 However you enjoy it, do try it. I think you'll find it a little slice of tomato heaven.

EDIT 9/1/16: I made this again this evening with the changes I proposed above plus one more-- I used 3 Tablespoons of the olive oil mayonnaise and 5 Tablespoons of the 2% plain yogurt to make up the 8 Tablespoons total I was planning to use. Not only did I cut the calories per slice from 235 to 187, but it remains fresh and delicious and heavenly. Nobody missed that ultra-thick cheesy layer. It's still plenty cheesy and satisfying, and I'm thrilled it came out so well. Hurrah!!! Lighter version for the win!
Posted by Natalie M at 1:00 AM