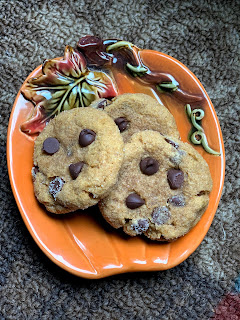 I know, I know. It's November. The month of tricks and treats is over.

Well, guess what? I felt like we needed one more treat, even though we've treated ourselves PLENTY over the past 31 days. And I felt like it should be another pumpkin recipe because, well, I had a craving for these cookies, tbh.

I featured a very similar recipe the first year I blogged my month of tricks and treats, in the form of these Pumpkin Cinnamon Chip cookies. I noted in that post how I’d made one cookie with chocolate chips and I liked it even more than the cinnamon chip.

They’re chewy and spiced, and I liked the added depth of flavor the chocolate added. I just really enjoy them.

For the past several days, I couldn’t stop thinking of these cookies. Then, as if the cosmos was either taunting or inspiring me to get off my duff and finally do something about it, Sally of Sally’s Baking Addiction, remade her classic and posted them again. Time to bake!

Melt a stick of butter in the microwave. After it cools slightly, whisk in ¼ cup brown sugar and ½ cup white sugar until they are proud to be lump-free. 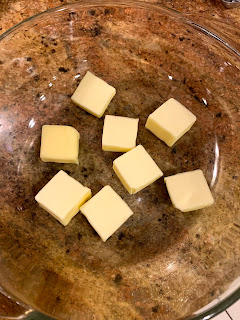 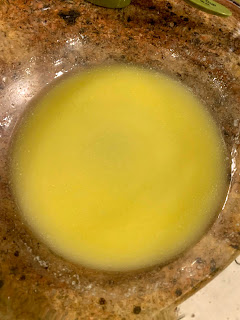 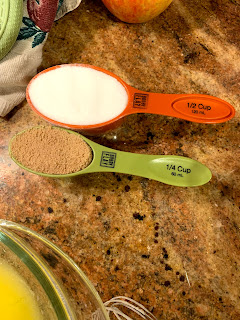 Add in 1 teaspoon of vanilla and 6 Tablespoons of blotted pumpkin puree. You want to measure the puree after you’ve blotted it to remove the moisture. (It was about 8 T of non-blotted pumpkin—that’s a lot of moisture in there!)
In a separate, large bowl, whisk together 1 ½ cups (190g) all-purpose flour, 1 ½ teaspoon cinnamon, ¾ teaspoons pumpkin pie spice,  ¼ teaspoon EACH salt, baking soda, and baking powder. 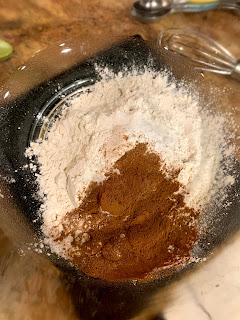 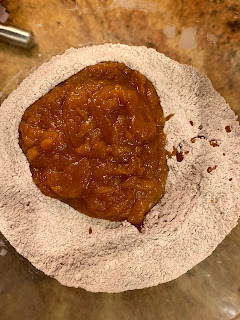 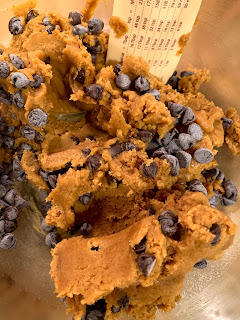 Cover and refrigerate for 30 minutes.

After 30 minutes, use a medium OXO scoop to portion about 1 ½ Tablespoons of dough. Roll into balls and roll in cinnamon sugar. 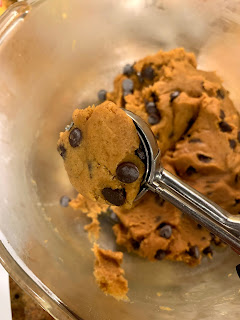 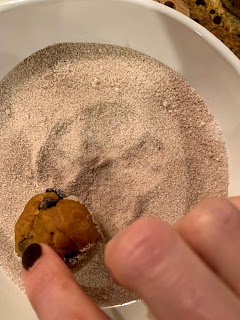 Note: I wanted the cinnamon sugar coating on them (as I had with the cinnamon chip version) so I mixed ¼ cup white sugar with 1 teaspoon of cinnamon, and rolled them in there before placing on my pan.

Place cookie balls about 2 inches apart on a Silpat- or parchment-lined cookie sheet. Since they don’t spread much on their own, gently press cookies down with the back of a spatula.
I pressed a few chocolate chips on the tops at this stage, just so they looked nicer and to ensure each cookie bite would have some chips in there. (Apparently I misread the directions because Sally noted that you should press chips onto the tops of the warm, freshly baked cookies. Luckily my way worked on these cookies, though, so my little boo boo wasn’t an issue.) 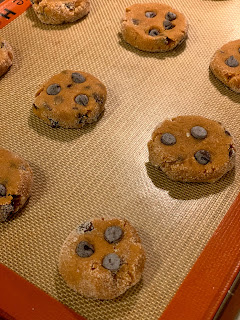 Bake 10-12 minutes or until the edges appear set (but the centers may still look soft —which is what you want.) Allow to rest on the pan 10 minutes before removing to a wire rack to cool completely. 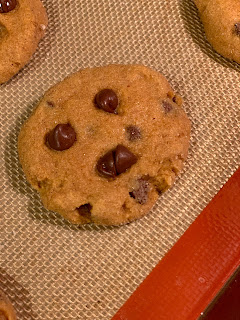 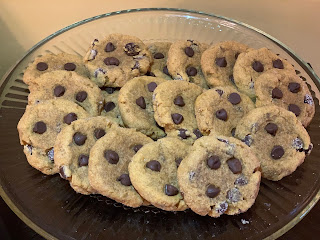 Sally claims these actually get more chewy and pumpkin-y the second day, and you know what? They do! 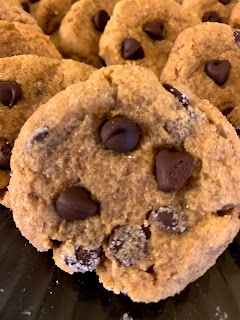 POST-SCRIPT: After I drafted this post, I ended up making these yet AGAIN. (This time for an event at my gym.)  I decided to switch things up and, prior to folding in my chips, separated the base batter into 3 portions. Then I added regular chocolate chips (as I showed you just now) to one third, white chocolate chips to the second third (which I also rolled in cinnamon sugar), and cinnamon chips in the final third (which I didn't roll in cinnamon sugar because of the cinnamon chips).
They came out great, again, and I loved having the variety all on one plate. There's so many ways to play with these. I hope you try them this November! (Maybe as a Thanksgiving dessert option? Just sayin...) 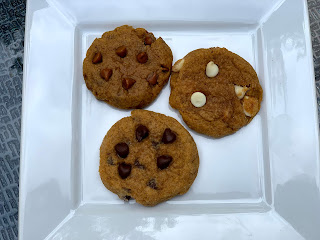