Halloween and How to Use Up Leftover Halloween Candy 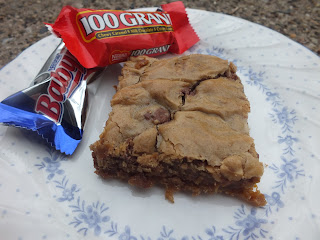 I don't know about you, but Halloween here felt SO LAME this year. I imagined Halloween falling on a Saturday would mean tons of extra kids--maybe even groups of older kids--roaming the streets in costume, possibly staying out later than normal because it wasn't a school night. I was prepared for my normal crowd (we average around 50 trick-or-treaters each year, though last year we had closer to 70) and then some, with 87 bags each filled with 3-pieces of candy. (My younger daughter and I spent an evening last week sorting all our individual bags of Fun- and Snack-sized candy bars and then portioning three different bars into each festive bag. There was just one Milky Way left over. Oh, and the Twix and Xtreme Snickers I sampled while we worked...)

My husband is the one who takes the girls out. I'd like to go along and keep him company, but then there would be no one here to hand out candy. People have said, "Oh, just leave the bowl out with a sign to take a certain amount." But guess what? NO WAY. We did that one year--the year of the swine flu outbreak about four or five years back. My husband and older daughter (who, at the time, was an only child) were both sick, and I didn't think it was responsible to be opening the door over and over again and potentially spreading swine flu to unsuspecting kids, so I set the bowl out front around 6:30 with a note to take 3 pieces each. I peeked out at the bowl at 7. IT WAS EMPTY. Some jerk stole the contents of the entire bowl! Not cool. Soooo not cool. Anyway, never again with that.

Thus, I remain at home and hand out candy. Last year I started tracking my trick or treaters to help me better prepare for future candy-buying. (When I mentioned this to two of my friends, both of them laughed and said, "Only you..." I guess other people aren't as into collecting statistical data as I am. Hmm.) Anyway, I made a chart broken into 15-minute increments and tallied how many kids knocked on my door per time chunk. Because there were so many repeat costumes, I also tallied anything I saw on several kids. The most popular costumes last year in my neighborhood were Anna & Elsa, Teenage Mutant Ninja Turtles, Spider Man, and those dumb one-piece skin costumes that young boys like to wear for some inexplicable reason even though they look like walking...well, you know.

In case you're wondering at the breakdown (I know you aren't, but since I assembled the data, you're seeing it, dammit!) here it is:

Interestingly, the array of costumes this year was quite broad. I didn't note any repeats, which is abnormal, but nice. And there were a lot of quality costumes. My favorites were a very well-done zombie, Dorothy (complete with Toto in a basket and really nice ruby slippers), and a duo in a Queen of Hearts and Alice in Wonderland garb. They all happened to be on teens/tweens.

While I was at home sitting around with the kittens waiting to hand out candy to people not coming to collect said candy, my kids were having a fab time getting tons of their own loot--my older daughter counted hers and had collected 235 pieces.


For perspective, that's 91 more pieces than the 144 I had remaining when the night was over. UGH!


I love baked goods, as you know. But candy on its own? Not so much.

The most logical thing to do with the candy, then, was figure out how to turn it into a baked good. I had to look no further than my favorite baking blog, Sally's Baking Addiction. There, I found a recipe for Candy Bar Blondies. (Just when you thought candy couldn't be less good-for-you, these happened. Lol!)

Unfortunately for your waistline, they were a snap to make. Here's a photo journal of how mine came together.

I started by chopping up 1 1/2 cups of candy bars. Use whatever you have on hand. I used 16 bars of Twix, Butterfingers, Snickers, Crunch, Baby Ruth, Milky Way, and 100 Grand. (I don't know if you noticed, but those Fun-size bars are shrinking more every year...What a rip-off!) 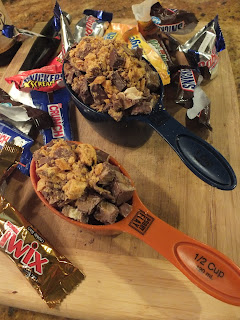 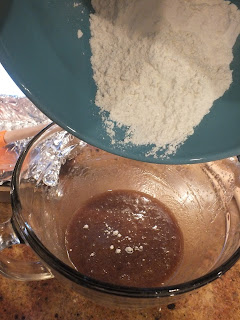 Then in went the candy. It's almost equal parts candy and batter! 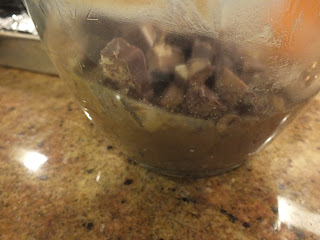 I folded in all that beautiful candy. 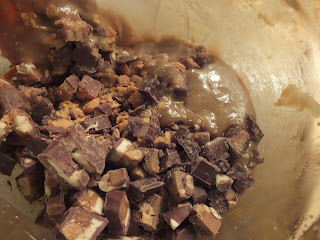 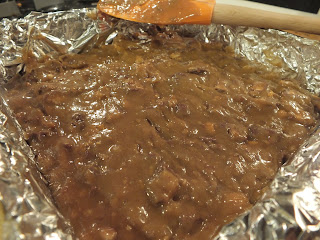 It baked at 350 until lightly browned on top. Mine took 30 minutes. 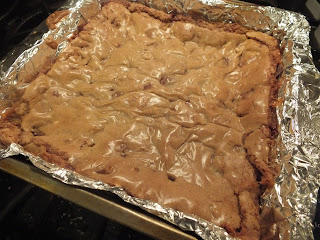 When slightly cooled, I removed it from the pan and peeled away from foil. 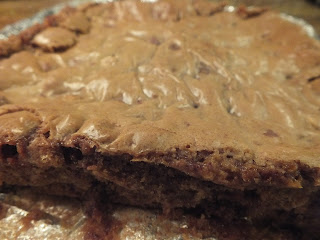 Then cut it into bars. 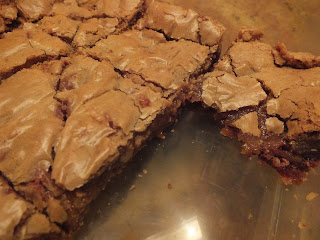 Finally, I served it. It can be warm and gooey, a la mode... (Admittedly, that was gluttonous. It really didn't need the ice cream. A glass of milk, however, is sorta necessary.) 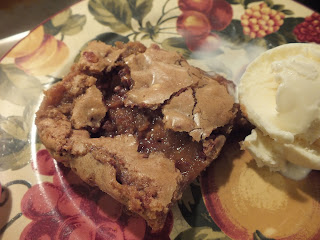 ...or on its own when completely cooled.

As you might imagine, it tastes like all your favorite candy bars had a baby. A delicious, caramel-y, peanutty, soft-yet-chewy baby that it is acceptable--nay, encouraged--to eat.

Now I just need to make 8 more pans of these and the candy will be gone.
Posted by Natalie M at 7:58 PM